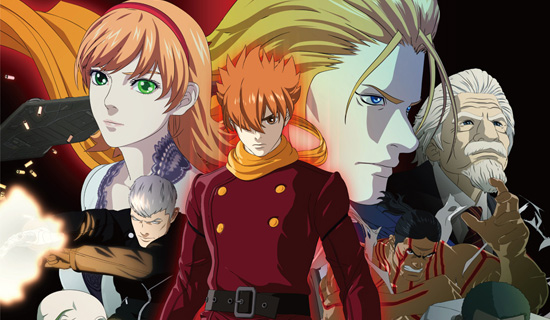 At this point, director Kenji Kamiyama has pretty much become the filmmaking equivalent to a cover band for Mamoru Oshii. Between constantly hiring Oshii mainstay Kenji Kawai to do his musical scores and a penchant for inserting complex real world politics and, lately, religious allusions, it can be difficult to discern the two, except that Kamiyama plays more in the key of Patlabor as opposed to Innocence. In other words, he creates sci-fi action stories that don’t let their philosophies get in the way of solid characterization… most of the time.

009 Re:Cyborg isn’t the first time that Shotaro Ishinomori’s classic manga Cyborg 009 has been given a darker and edgier remake – 2001 brought us an excellent TV anime that even got airplay in the US. However, that show was still light-hearted and family-friendly, with a strong focus on action and over-the-top enemies straight out of 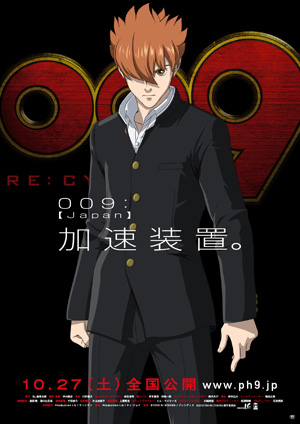 009 Re:Cyborgtokusatsu – perhaps not surprising, considering Ishinomori created both Super Sentai and Kamen Rider – but I digress.

For his part, Kamiyama has decided to take it even further than the 2001 series, completely abandoning Ishinomori’s cartoony designs for stark, more natural designs which are about as close to live-action as anime can get while still being recognizable as such, cleaning up (most) of the racial caricaturing of the original designs in the process. Not content to simply re-design, Kamiyama also updates the setting to exorcise, or at least severely downplay, virtually all the fantastical elements and puts us in a morally ambiguous world of gritty political intrigue where the Cyborgs have seen action in Vietnam and the world has been caught in a stream of terrorist attacks. As the press materials put it, it is “a world that has lost sight of justice.”

The opening moments of the film show us Shanghai seemingly getting bombed over ominous pseudo-Biblical narration in imagery that deliberately evokes 9/11.  The Cyborgs haven’t been on active duty in 27 years outside of basic tasks with some missing – American Jet Link is in the NSA; German Albert Heinrich is training the German special forces GSG-9; Great Britain (guess where he’s from!) is in the SIS; Japanese Joe Shimamura is under deep cover as a high school student with no memory of his past; African Pyunma is digging up ancient fossils which includes what appears to be an angel. Somehow this ties in with the terrorist attacks, being orchestrated by an entity known simply as “He.” Somehow.

What the film really has going for it is style. Coupled with Kenji Kawai’s best film score since Patlabor 2, everything is rendered in a cel-shaded 3D which looks absolutely gorgeous for the most part, surpassing everything that has come before it, such as the merely acceptable Berserk films. This leads to the cyborgs having true justice done to their mechanical natures – Jet’s rocket feet and Albert’s machine gun fingers, in particular, open up with every slot, bolt and thruster defined in minute detail. Kamiyama realizes that when you got 3D you got no problems with rendering elaborate battle sequences so long as the staff has its act together. And boy howdy, do the staff have their act together. Nothing like watching Joe and the gang rush through an army of killbots nicked from Jin-Roh and taking out large portions of the surrounding environment with them. All in the name of… something.

So, I can’t lie to you dear reader: under the never-ending stream of political jargon, religious allusions, bluffs and double-bluffs, I had very little for what was going on at any given point in the film. Having watched movies, live-action and anime alike, in raw Japanese for years now, I thought I would have a handle on it. I would put my Japanese 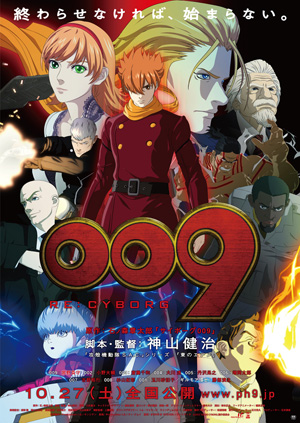 ability exclusively to blame if it weren’t for the fact that the native audience members around me were equally confounded.

And the case remains that however tight Kamiyama’s direction and attention for detail in sweet action scenes is, the film hits a stumbling block whenever it needs to explain itself. All the high-speed action and tension comes a halt with over-long, mind-twisting dissertations on the nature of the human (and cyborg) condition.

With those caveats in mind, 009 Re:Cyborg is still a far better filmgoing experience than either of Kamiyama’s earlier and lukewarm Eden of the East movies and is still a worthwhile watch on the strength of the visuals and audio alone. Despite an anti-climatic conclusion, it’s on par with the original Ghost in the Shell with its ambition and execution of melding high philosophy with bursts of intense action. It may well be more gripping once it’s given some subtitles and, given the aggressively international approach it’s pushing for, it’s only a matter of time.