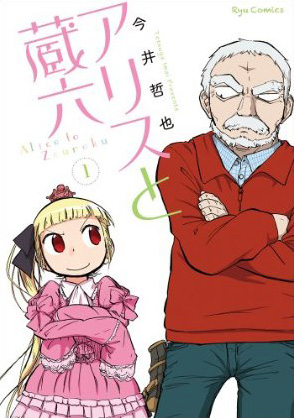 Zoroku is a grouchy old florist just minding his own business when young girl Sana disappears in front of him—right after reciting his date of birth and family details. He tries to forget about the incident and carry on as normal, but she appears again in his car and insists he help her. His routine is shattered when she leads him on a getaway from twin girls with destructive magical powers, ending with a visit to the police.

When all the damage the girls caused is miraculously reversed, Zoroku can no longer ignore that something very strange is happening. Worse still, he’s caught up in it whether he likes it or not, particularly when he allows Sana to come and stay with him on two conditions: she stop using her powers and learn some manners.

There are a number of access points into this story. The odd couple relationship between grumpy, down-to-earth Zoroku trying to drill basic social niceties into chaotic, all-powerful Sana. The mysterious references to Sana as “The Red Queen” and the many other Alice in Wonderland references. Mentions of “the Laboratory” where Sana supposedly came into existence. The old friend of Zoroku’s who seems to know the real story behind Sana and suggests that the Laboratory could be doing even worse than keeping her magical friends captive.

As you will have guessed, Alice & Zoroku is a busy manga. There’s a lot going on, spread across a sprawling cast, with many loose ends to tie up over the series. It is, however, better paced than this year’s anime adaptation, which alternated between staid slice of life and highstakes supernatural battles. The manga throws a lot at you, but the threads feel balanced and controlled.

Most impressive is the character of Sana, the emotional heart of the story. In just a handful of chapters we see her revered by some characters and told off by others, displaying unimaginable power on the one hand and refusing to apologize for a careless mistake on the other. She is a fully realized character and treated as such, while retaining enough mystery to be intriguing. If Zoroku is handled with as much care, their dynamic will be a solid through line to sustain you through this jam-packed mishmash of genres. Overall, it’s a fun and intriguing start to what promises to be a large scale story.