An exciting tale with plenty of secrets to unravel

There simply aren’t enough space stories in anime. Sure, there are space operas and mecha series, but when you get right down to it, there aren’t enough adventures that revolve around the trials and tribulations of trying to get back home after being stranded somewhere in the universe. To scratch that itch, we have series like Galaxy Express 999 or similar adventures, but it’s nowhere near the scope or excitement of shows like Astra Lost in Space.

As you can probably surmise based on just the title, it’s very much a riff on Lost in Space, the classic sci-fi TV series, which itself is based on the novel Robinson Crusoe. These stories center around a family (or individual) that find themselves stranded in space (in Lost in Space‘s corner) and unable to find their way home. That’s exactly the case with Astra Lost in Space, and it’s all the better for it. This setup makes it perfect to binge, as it continues to unravel additional information across each episode.

In the year 2063, a group of Caird High School students heads to the strangely named planet McPa for their first time at Planetary Camp for training and a variety of missions. Everything goes according to plan at first, but while exploring the surface, the students stumble upon what can only be described as a black hole that hurtles toward the kids. It sucks them all in one by one, and things go dark.

The premise is intriguing enough, but so is the cast. It may seem like it’s overstuffed with characters, but the nine make for a seriously interesting mix of personality types, from Luca’s sprightly personality (and hidden secrets) to Ulgar’s beanie and super emo look. You’ve got the uber-positive heroine named Aries too, who’s falling slowly in love (or like, since they’re in high school), the courageous Kanata, the cool and intelligent Zack (and Astra pilot), heiress Quitterie, her 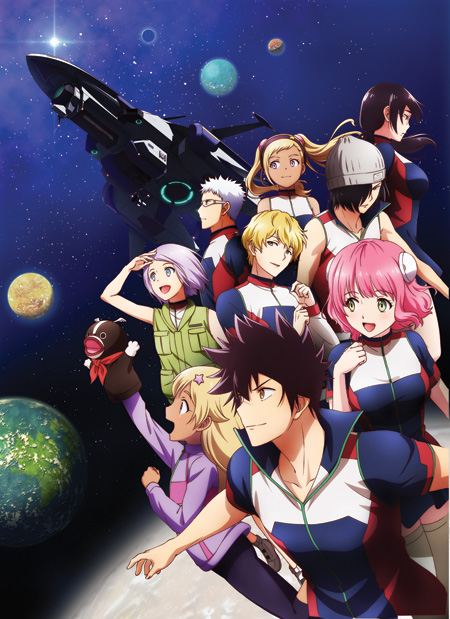 adopted sister Funicia, the quiet and introverted Yun-Hua, the gorgeous Charce, and eventually an additional member that I won’t reveal here—but as large as the cast seems, they all complement each other well.

Each character eventually has plenty of time in the spotlight, and they all have colorful back stories that sometimes take you by surprise. But it’s all about checking out the outer reaches of space, of course, and as such the various planets the crew of the Astra land on vary from episode to episode. One day, the team finds themselves on a tropical vacation-like destination planet, and another on one with a large variety of plant life and organic creatures.

The cast and space exploration is exciting on its own, but all these elements join together to weave an exciting tale with plenty of secrets to unravel. With each new dilemma (an assassin on the ship? Someone has a gun?) you have even more of a reason to tune in and see what will happen next. It’s a lengthy space odyssey that goes places you wouldn’t have expected, and it knows exactly what it’s doing with the story materials it has to work with. If you find that there’s a dearth of space-based anime series in your to-watch list, Astra Lost in Space is a great choice to check out—especially if you’re tired of so many of the “me too” anime out there each season with moe blobs or isekai stories. This is accessible sci-fi in anime at its finest.