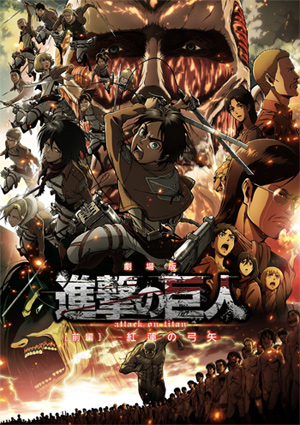 As Attack on Titan fans are painfully aware, there was no season 2 of the anime series set from the get-go. Hard as it is to imagine now, there was no guarantee the show would be the monster success it was – the manga, reportedly, wasn’t a huge seller until the anime started airing.

As a consequence, though a second season is now in the works, Wit Studio and the concerns behind the titanic series have had to figure out ways to keep the momentum going with no show on the air. One result is two films that compile the TV series, the first of which, Crimson Bow and Arrow, was previewed last week at the Tokyo International Film Festival.

Crimson Bow and Arrow, named after Linked Horizon’s first opening theme, compiles the first 13 episodes of the series. As with most films of this kind, it’s largely a recut of the original TV footage – there’s supposedly some new animation and voice acting, but you need to be a far more hardcore fan than I am to spot it.

Compilation films like this are a true exercise in editing. In cutting down about five hours of material into two, a lot of choices have to be made: what do you emphasize and what do you leave behind? Do you turn the mini-size Titan into an action fest? A character study? An exercise in world-building? How much do you rely on viewers to already know the basics?

These seem like obvious questions to ask when you’re faced with cutting three hours of material, but there are plenty of anime compilation film that have, intentionally or otherwise, eschewed the kind of laser focus necessary in creating a lean, mean version of a TV series, try to include it all, and end up an incoherent mess. 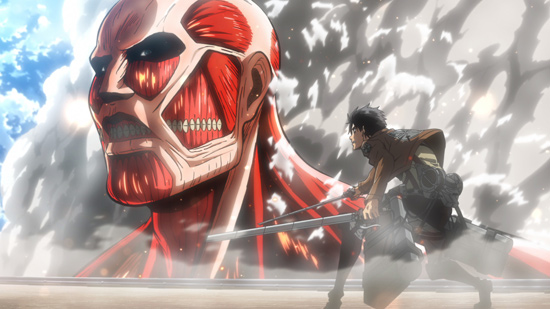 What got cut? For one thing, the world building (or world explaining, you could say) has been greatly reduced. There’s no time to explain what Titans might be, what this wall thing is, how maneuver gear works, etc. The nice explanatory eyecatches between commercial breaks are gone, natch, as well as most expository dialogue about what’s actually going on in this world.

Secondary characters, as you might expect, get a lot less screen time. Most of the trainees’ backgrounds and character moments take place during the training episodes, which are totally excised here. That doesn’t mean fan favorites like Jean, Sasha and Marco aren’t there at all, but when, um, significant events occur (trying hard to avoid spoilers here, guys!), they definitely have less emotional impact if you haven’t seen the series.

The upside of these cuts is Crimson Bow and Arrow isn’t your standard mess-of-a-narrative compilation film. It has focus – but just what it laser-focuses on is a bit of a surprise, at least for me.

Attack on Titan was a fine series, but even its fans might admit there were times when it felt a bit… draggy. Characters had a lot of inner monologues (okay, outer monologues too – didn’t a Dot Pixis speech take up almost an entire episode?). As such, I expected Crimson Bow and Arrow to excise a lot of those inner monologues and become a kind of “greatest hits” of Attack on Titan action scenes – a beginning-to-end thrill ride. 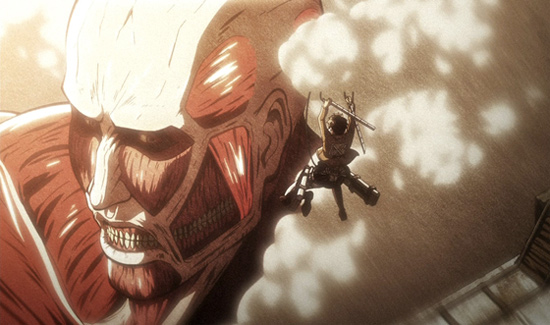 But the inner feelings of our main characters (especially Armin and Mikasa, since Eren is, uh, predisposed throughout much of the Battle of Trost) are front and center. For one example, the flashback scene explaining how Mikasa and Eren met, which you could totally excise without any impact on the narrative, features prominently.

On one hand, props to the team behind cutting this film for not abandoning characterization even in this digest format. On the other, despite the shorter running time, the Battle of Trost somehow manages to drag just as much as it did on TV. Though the fight scenes are certainly retained, a balls-to-the-wall action film this is not.

Crimson Bow and Arrow basically accomplishes what it’s meant to be do: keep the Titan ball rolling while Wit frantically pumps out more original content (a Levi-centered OVA is due out in December, and a second season can’t be too far away). As an introduction point for Titan newcomers: it’s definitely a Cliff’s Notes version: it’ll get you caught up nice and quick, but if you’ve got the time, why not just watch the series?

This story was original run in the November 6th, 2014 edition of Otaku USA e-News. If you didn’t get it, click here to subscribe! 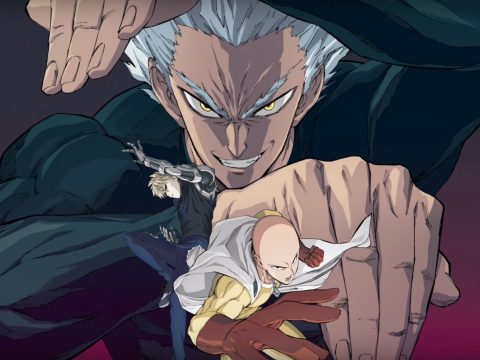 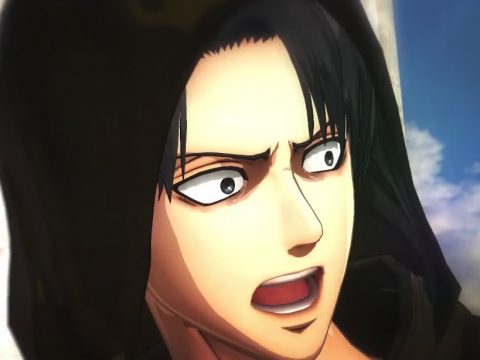 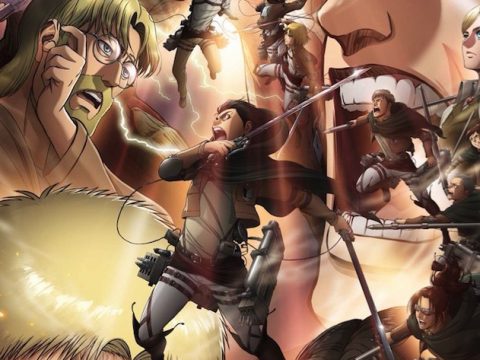 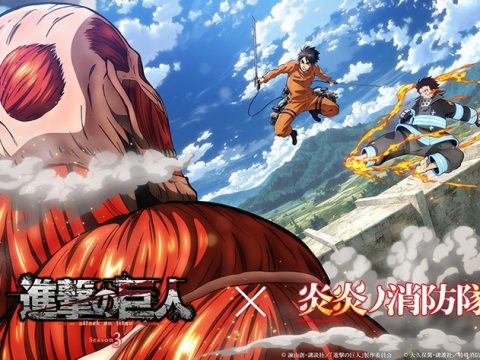 Attack on Titan Battles Alongside Fire Force in AnimeJapan 2019 Visual 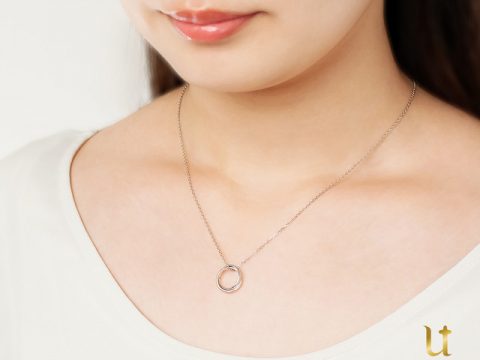