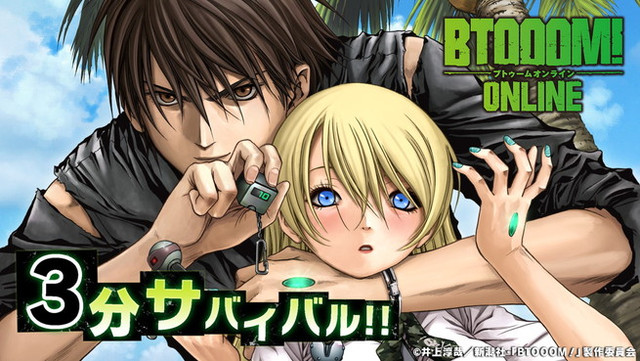 Based on the manga by Junya Inoue, the BTOOOM! anime ran for 12 episodes back in 2012, and we could be getting more… if the newly-launched mobile game sells well, that is. That’s the gist of the promise game producer Masato Hayashi made during a launch event for BTOOOM! Online, which is now available on iOS and Android in Japan. Hayashi boldly said that if the game makes it to the top 5 on the domestic app sales charts, a new season of BTOOOM! anime will be produced.

Whether this is just a fun means of publicity or not remains to be seen, but it’s certainly a good way to make sure BTOOOM! fans in Japan get their mitts on the free-to-play game. BTOOOM! Online‘s “stealth bomber action” has six to eight players battling throughout combat arenas, of which there are currently two. Suzuko Mimori, Haruka Terui, Sora Tokui, Tomokazu Sugita, Takehito Koyasu, and Ryōta Ōsaka all lend their voices to the mobile outing, which includes optional in-app purchases.

Here’s a promo from earlier this month: