Cells at Work! just might be the first “healing” anime about the human body healing itself! 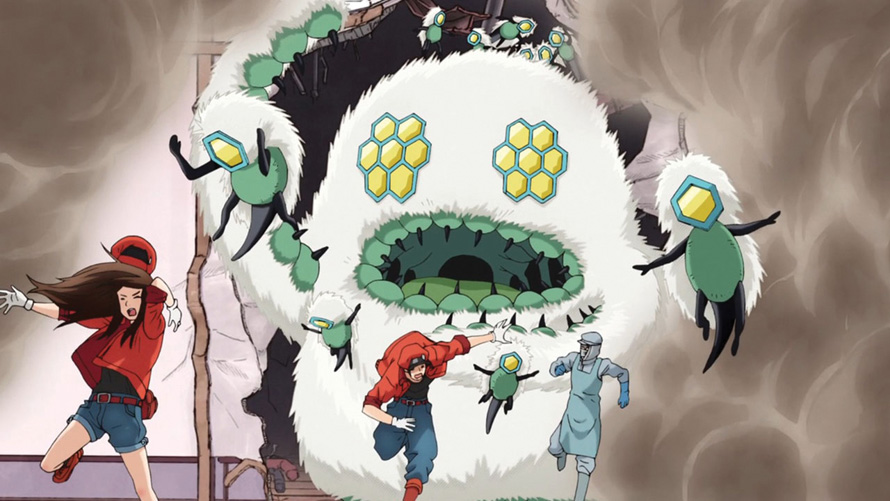 Cells at Work! is the story of a small woman with a job as big as the city she’s living in … by which I mean, it’s pretty big. She’s one of the many employees delivering packages here and there, and it’d be a pretty easy job if she didn’t have any sense of direction whatsoever. Not to mention the constant barrage of criminals, vandals, and lord-knows-what-else weirdos she encounters every day. It’s a stressful job, but her friends help her get by; a tough-as-nails police officer, a lovely maid, and a crackerjack repair crew she meets are all part of the same community in which she struggles to fulfill a decent life.

By the way, this new city she’s living in is the human body itself. Our female protagonist, the one who gets lost during deliveries, is actually an anthropomorphized red blood cell (named AE3803). The delivery company she works for is the constant flow of blood and oxygen from your head to your feet. That officer she meets just about every day is a white blood cell (named U-1146) that sadistically kills foreign germs and pathogens; the motherly maid is a macrophage white blood cell known for eating (or in this anime’s case, slaughtering) foreign substances; and the repair workers are the platelets, whose function is to initiate a blood clot when a blood vessel is injured. 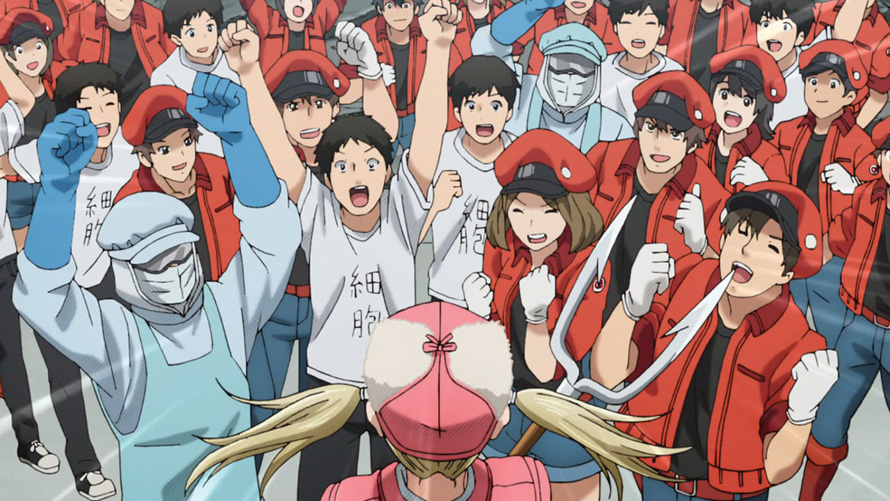 Welcome to Cells at Work!, ladies and gentlemen.

This summer 2018 anime, adapted from the manga of the same name, has managed to become a fascinating work of art in such a short amount of time for a lot of different reasons. It’d be pretty easy to call it the anime equivalent of Osmosis Jones (remember that one, folks?), but the similarities are only at the surface level. It’s all in the execution: Osmosis Jones was pretty much a cop flick in the human body. Cells at Work!, on the other hand, goes out of its way to be a primer on basic microbiology with an anthropological angle. It’s a unique blend of comedy and education that harkens back to the classic “edutainment” programs such as Bill Nye and The Magic School Bus, but it’s clear from the beginning that the anime has taken an approach far different from swimming in Ralphie’s bloodstream, and it surpasses everyone’s expectations as a result.

No matter how weird things get, Cells at Work! keeps itself committed to several truths, the first two being that if a person’s cells were people, there would be a lot of them, and that every person has a specific role in making the whole body tick successfully. It’s like a huge company, except the primary goal, rather than a mere profit, is to ensure the well-being of the body itself. You can see this right away in the characters themselves; every part of the body, every cell, on a microscopic level, is anthropomorphically translated into something that’s part of a unique, intricate society of hardworking people that never want to quit on you. 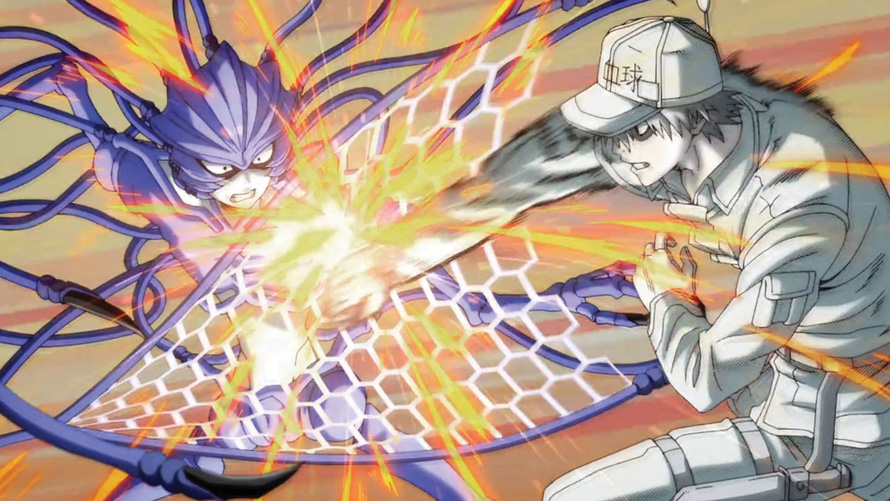 That being said, the personality of each humanized cell matches perfectly with its designated function, making for some creative characterization: The red blood cells are red-clothed, young individuals wheeling boxed oxygen to the proper recipients throughout the body. The white blood cells are elite virus hunters that will ruthlessly track down and kill any foreign invaders no matter what. The macrophage is a lovely looking maid that fights viruses with large knives and heavy blunt objects, and even becomes a monocyte when not in the blood stream (though macrophages are supposed to eat foreign outsiders instead of just beating them up, but that’s just a little artistic creativity for you). The numerous platelets—who I swear have nearly become the mascots for this show—are imagined as small children who perform repairs to the body, despite the fact that, in real life, they’re incredibly small compared to other cells; their character aligns perfectly with their designated function. 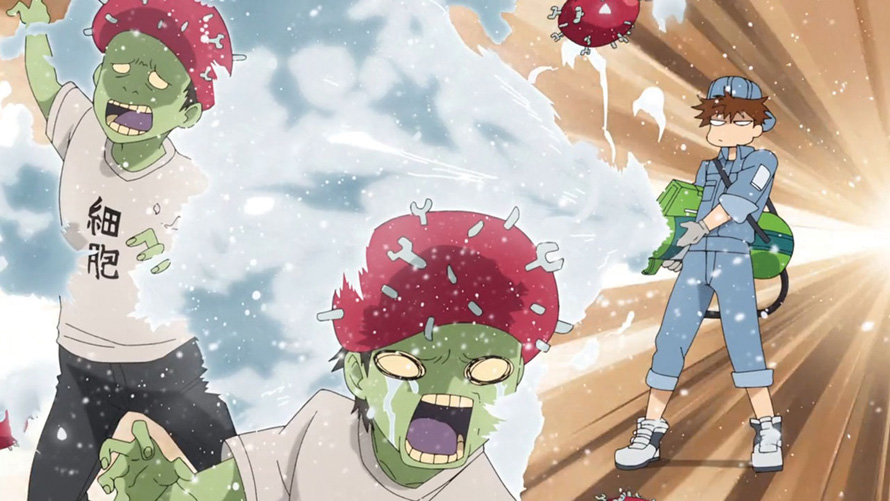 In addition, whenever a new cell or cell function comes into the picture, a narrator pleasantly explains cell functions and importance each time. Then the story shows that function in practice. So the education of who does what is actually necessary for the entertainment, thus allowing the show to live up to its “edutainment” label. Its one thing to make an educational anime, but it’s something else entirely to make sure that the education is required to understand what’s going on.

The third conceptual commitment Cells at Work! makes is that if all of these cells are people in one big city, the amount of death and destruction in a body subjected to injuries and diseases will be off the charts. We can’t talk about this anime without bring up the sheer amount of hyper-violence that gets tossed around. Yes, it’s violent, but it’s fitting considering these cells are trying to keep you alive. A white blood cell slicing the throat of a virus is just another day at work. These are the moments that make it obvious that this animation is coming to us from David Production, the same studio that gave us JoJo’s Bizarre Adventure. The combination of bold colors/lines, striking poses, and incredibly adorable character designs helps to create an aesthetic that punctuates the playfulness that can come from learning about what makes you tick. While it doesn’t place the same emphasis of fighting as your average shonen anime, there are enough knife fights and rivers of blood in this show for shonen fans to love it. Did I mention that sneezes are portrayed as heat-seeking missiles? 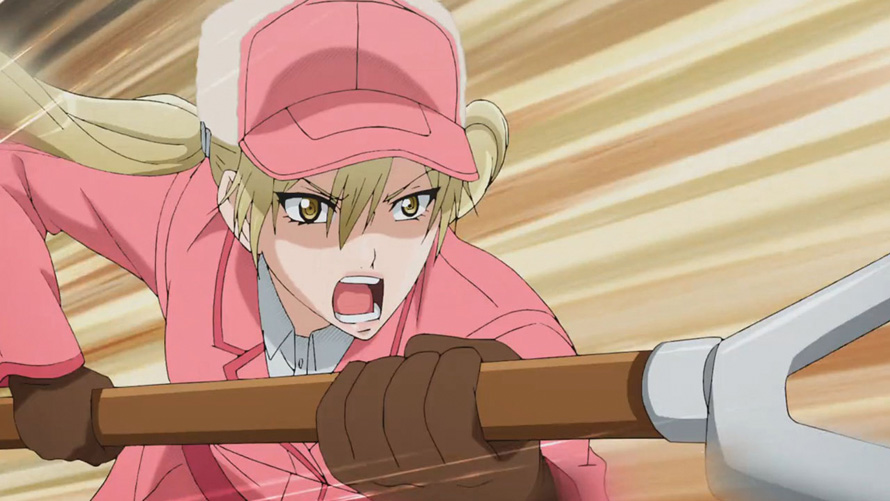 Recontextualizing the functions of the human body as various anime tropes feels like a challenge, but Cells at Work!, currently streaming on Crunchyroll, practically makes it look easy. Its ability to convert the dry, scientific content you could get from a textbook into a wholesome and engaging, not to mention really funny, format without losing its educational value, is truly something to be admired. When it comes to “edutainment,” what we have here is a textbook case of the “best of both worlds.”

Cells at Work! is available from Crunchyroll.

New Attack on Titan Pendants Feature Engraved Quotes from Series
Pokémon Anime Prepares to Kick Off Its 22nd Season in the U.S.