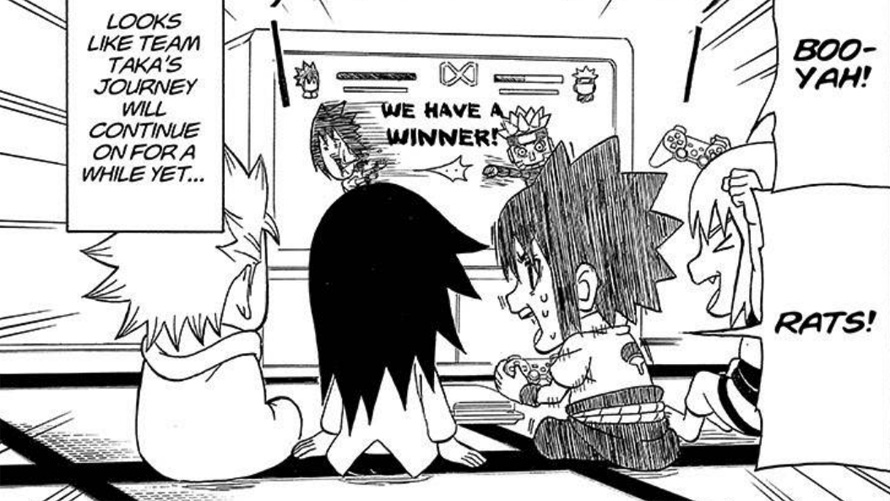 When you think of the funniest characters in Naruto, Sasuke—the brooding loner whose mission in life was to kill his brother Itachi—probably doesn’t come to mind. But Rock Lee already had his own comedy spinoff manga, so now it’s Sasuke’s turn! As in the original manga, Sasuke’s still out to kill his brother, but this time he’s got a whole team with him to get it done.

Sasuke’s new shinobi friends, collectively known as Team Taka, are Suigetsu, Karin and Jugo (like the Spanish word for “juice”). The four follow Sasuke as he searches the land over for his brother to murder, and not because Itachi deleted his Dragon Quest save file, though that’s a very severe offense. Alas, it doesn’t help that everyone’s an absolute bumbler.

While it’s normal to see Naruto himself clowning around and reduced to comic relief this time Sasuke’s the funny character. When’s the last time Sasuke used the Sharingan to sing the “perfect impersonation cover” of a girl group’s pop song during karaoke? Did you ever see Sasuke challenging his brother to a contest of who can stand the most sweltering heat from a kotatsu table? Or Itachi on a hardcore search for chiffon cake? 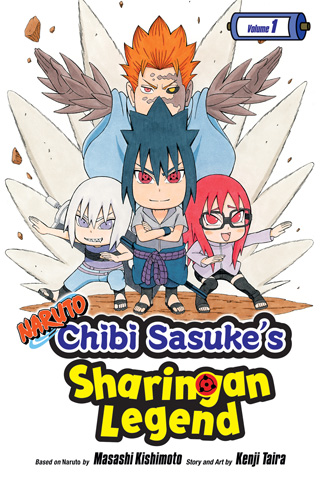 Each stunt is more ridiculous than the last, but it’s not all Sasuke who’s bringing the jokes. The members of Team Taka are just as silly, and it’s not unusual to see them sitting around playing Naruto video games instead of looking for Itachi. The artwork suits each character well, giving the normally brooding and moody Sasuke a childish lilt and reducing the intense Itachi to just another little cutie who pops in and out of the story at random to participate in ridiculous TV remote battles and other kinds of craziness.

Chibi Sasuke’s Sharingan Legend is a fun slice of silliness that Naruto and Sasuke fans should enjoy. Imagine Dragon Ball Z’s Vegeta seeking out Frieza to kill him but being sidetracked by karaoke battles and video games, and you’ve got a great idea of what to expect here. If there’s ever a series ripe for parody it’s Naruto. “Please enjoy this new version of Sasuke acting like an idiot,” says author Kenji Taira at the beginning of the volume. You absolutely will. Recommended.