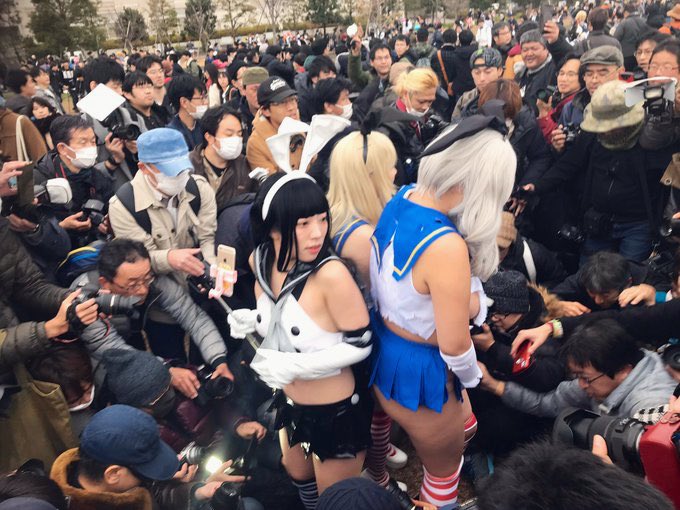 The winter version of Comiket—Japan’s largest convention for independent manga, anime, cosplay, and more—was held last weekend at Tokyo’s Big Sight. While plenty of the four-day event went by without incident, there was one particular moment during which a group of aggressive upskirt photographers put a trio of cosplayers in a troubling situation.

The incident went down on the third day of Comiket. The cosplayers in question were posing for photos with plenty of distance between themselves and the many photographers eager to get the perfect shot. When they decided the photographers could get a little closer, a swarm of upskirt-hunting participants closed in around them, leading to the potential for real danger.

You can hear the cosplayers attempting to laugh it off in the video below, but the laughter was a nervous reaction to a genuine fear for safety. Thankfully, nearby staff acted fast enough to pull them away before the situation escalated.

Twitter user @chonachonawill2 shared some comments from the cosplayers:

Here’s a translation via SoraNews24:

“The ring around us was too large so there was an attempt to make it smaller but too many people had gathered so it was a mistake. It was frightening, but staff were quick to pull the three of us out of there. Thanks to them there were no injuries and we weren’t touched. We were safe. Next time there’ll be more staff.”

It’s sad to see how invasive these photographers acted when given a little leeway, but we’re happy to know everyone involved got out of the situation safely.

BONES’ Josee, the Tiger and the Fish Anime Film Arrives This Summer
Dr. STONE Manga Goes on 1-Week Hiatus Due to Boichi’s Illness