One of the best things to happen to Devilman, Go Nagai’s horror manga masterpiece, is the inception of its expanded universe. The additions to the saga include complete reimaginings like Devilman G and Devilman Lady and expansions to the original story like AMON: Apocalypse of Devilman and the Neo Devilman anthologies. There are even crossovers with other characters owned by Nagai’s company, Dynamic Productions, like Devilman vs Getter Robo and the recent Cutie Honey VS Devilman Lady, though these are usually simple fluff that doesn’t shake up the Devilman status quo. But Devilman VS Hades, a crossover with Nagai’s giant robot series Mazinger Z and Great Mazinger, turns the Devilman universe upside down.

Devilman VS Hades takes place after the final clash between Satan and the Devilman Army in the original manga, but rewrites the ending. Hell literally breaks loose: human life is wiped out, souls reanimate random corpses on Earth and act on pure primitive instinct, and demons wreak havoc on the world with no one to stop them. Akira Fudo, the teenager possessed by Devilman, returns to see the carnage and simply doesn’t care. Even with his old foes returning to life for revenge, as well as those loyal to Hades tracking him down, Akira has one goal in mind: finding his unrequited love Miki somewhere within the sprawling hellscape. But Hades himself, having just discovered his realm destroyed, is spoiling for a rumble.

Devilman VS Hades is a tragedy, showing us a version of Akira Fudo who has fallen from faith and hope. This is different from anything we’ve seen in the Devilman franchise, but with his backstory at this point—the murder of his loved ones by those he swore to protect, the betrayal of his best friend—who can blame him? Character development aside, Volume 1 is essentially nonstop action, and the sharp, vivid art of 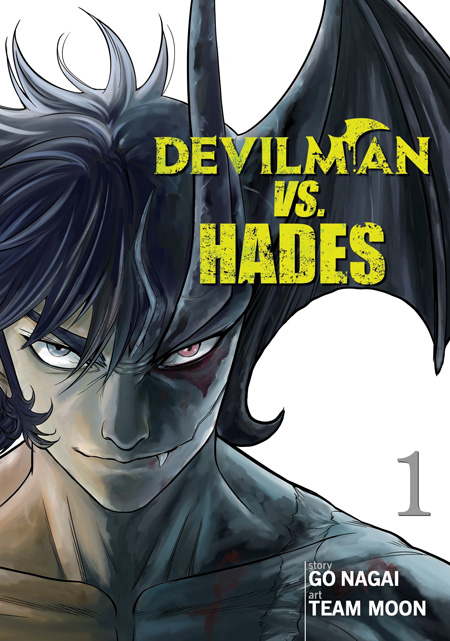 Team Moon fits it perfectly. Each battle slams onto the page and feels like a brutal throwdown. The character designs stay true to the classics but add distinctive new touches to great effect. Hades, for example, appears as both an elegant god and a seething, flaming aura reminiscent of the Emperor of Darkness in Great Mazinger.

Speaking of Mazinger, the lone downside of Devilman VS Hades is that readers don’t get more than a glimpse of the crossover connection. The first volume is devoted almost entirely to setting up the Devilman side of the story. Future volumes, however, promise to deliver more Mazinger. It should be quite a ride. Recommended.