Broly returns, this time as part of the official series canon, in the face-melting Dragon Ball Super: Broly! 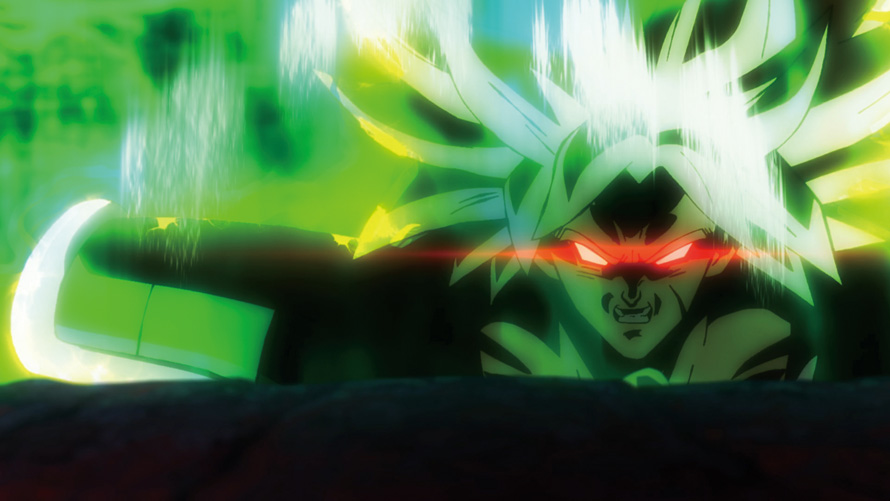 In the early to mid 90s, a beefy bruiser named Broly made his way into the world of Dragon Ball feature films and refused to leave. Lips pursed like a kid who won’t eat his veggies, Broly was hungry for one thing—screen time—and he got all that and more in 1993’s Broly—The Legendary Super Saiyan, 1994’s Broly—Second Coming, and 1994’s Bio-Broly. As fun as those movies may have been, any would-be haters could easily brush them off as something that exists outside of the main canon. Even series creator Akira Toriyama barely seems to remember handling his initial design, but now he’s taking full ownership of the heavyweight Saiyan warrior and reinventing him from the ground up in the 20th movie, Dragon Ball Super: Broly.

Flash forward to today and Broly has emerged triumphant, knocking the teeth out of the U.S. box office with a #1 weekday debut and a weekend total that popped it in a still-impressive #3 slot overall (see the sidebar for more on that). It’s a well-earned victory, too, because Dragon Ball Super: Broly is one of the most hyperkinetic, intense, and rewarding Dragon Ball movies to date. 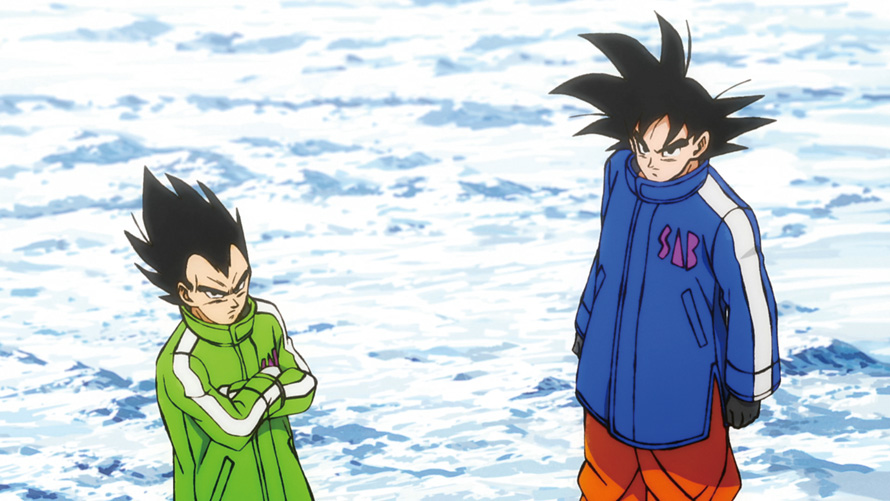 How do you take one of Dragon Ball’s most divisive characters and rework him in a way everyone can enjoy? There’s only one solution: You get Toriyama himself to do all the heavy lifting. The hard-working mastermind behind the franchise has really been putting his pen to the grinder since the series signed its new lease on life with 2013’s Dragon Ball Z: Battle of Gods. With him behind the wheel, the audience gets to sit back and enjoy a reworked origin story that ties Broly directly into the very beginning of the Saga, during which Goku and Vegeta were just glimmering lights within the green liquid of a pint-sized Saiyan incubator.

In fact, Broly’s own pediatric pod was resting just a couple dozen feet away from Vegeta’s at the time, a detail that isn’t lost on the eternally grumpy King Vegeta. He wants his own son, the prince of Planet Vegeta—seriously, imagine being this obsessed with yourself—to be the strongest Saiyan of all time. Heck, if he’s strong enough he might even possess the abilities of the legendary Super Saiyan! This line of thinking brings King Vegeta to Broly, a hapless babe who, as the King’s underlings so foolishly point out, has even more latent power just waiting to be unleashed. 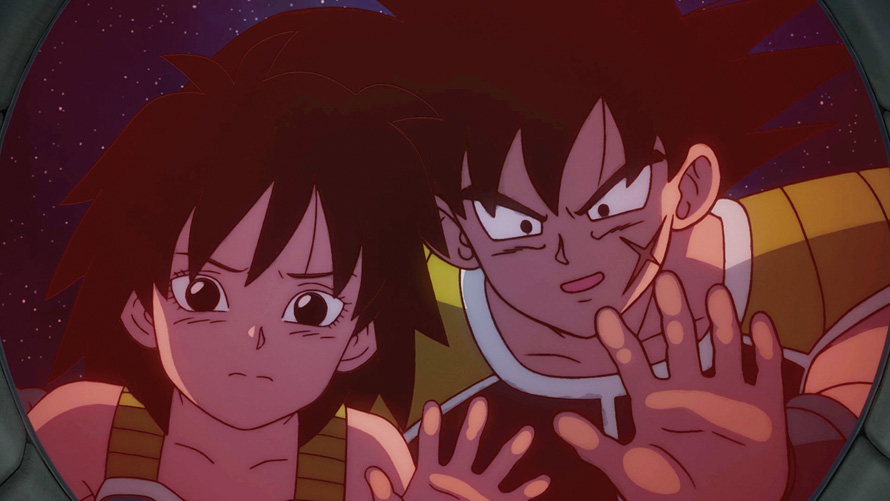 To make a long story short—and there is a lot of pre-Dragon Ball Saiyan story to soak in here—King Vegeta ain’t havin’ it. Shortly after King Cold introduces his own son, the nefarious Frieza, to the planet he’s destined to obliterate, King Vegeta exiles Broly and his father Paragus to a trash heap of a planet called Vampa. It’s there that Broly gestates. He and his father are forced to survive on a harsh planet against impossible odds, and the process turns the already powerful Broly into a killing machine who only remains under control thanks to Paragus’s harsh handling and the help of a hair-trigger shock collar.

Forty-one years later, a pair of newcomers working for the recently resurrected Frieza stumble upon this titanic Saiyan, serving up the perfect opportunity to get some revenge on Frieza’s mortal enemies, Goku and Vegeta. If the events of the Dragon Ball Super TV anime were any indication, Frieza’s return to being an irredeemable baddie was only a matter of time. Little did we know, however, that the results would be so ridiculously explosive. 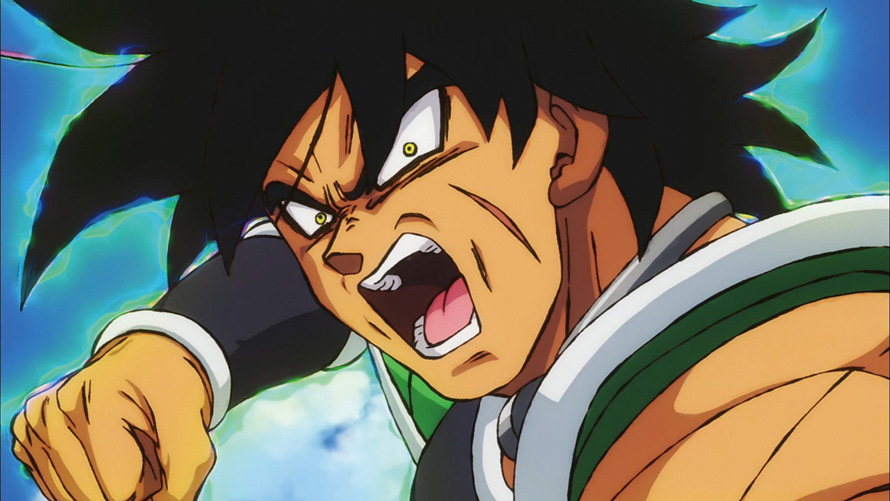 Without getting into spoiler territory, it takes Broly about an hour to get to the moment we’ve all been waiting for. It’s a wait that’s more than worth it, too, especially for folks who fancy themselves somewhat of a Dragon Ball historian. The entire first half of the movie is essentially an animated version of Dragon Ball Minus, the special bonus chapter Akira Toriyama whipped up back in 2014 as a setup for his Jaco the Galactic Patrolman manga. This origin story adaptation is a real treat for longtime fans, and it’s just icing on the cake for anyone who came for the slobberknocker to follow.

Dragon Ball has had more than 30 years to cultivate a unique style of action that’s often imitated and never duplicated. For my money, though, its depiction of mountain-leveling madness has never been as white hot as it is in Dragon Ball Super: Broly. From the very beginning—in those early teaser posters and trailers—it was clear Toei Animation was going for something a little different. Broly is more alive than any Dragon Ball feature before it when it’s at the top of its game. All those times someone described a Saiyan fight as something you couldn’t even witness with the naked eye; this is that hard-hitting magic slowed down just enough for our feeble human peepers to barely keep up. Fights go from third to first person through innovative transitions. Vegeta casually removes his jacket while trading blows with Broly. An arctic freeze makes way for pumping lava at a moment’s notice, and it all goes down to a soundtrack that literally chants each combatants’ name like a leftover hype choir from Akira. 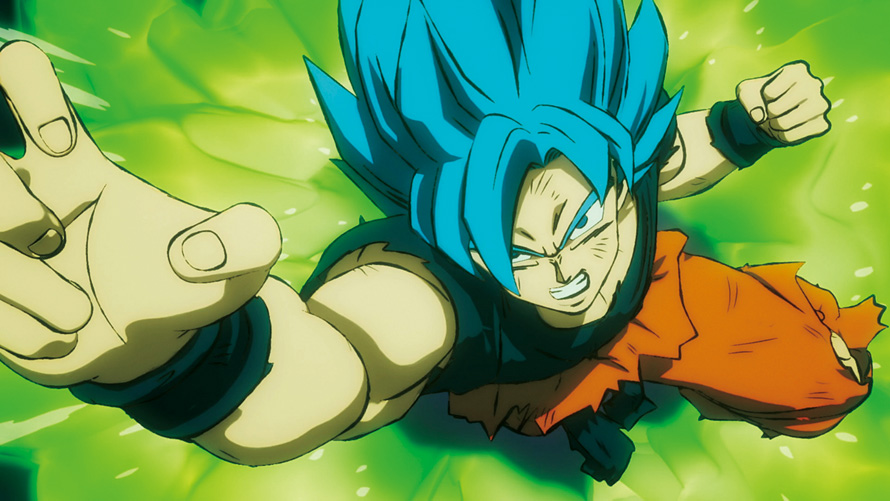 Director Tatsuya Nagamine—who previously helmed One Piece Film Z, as well as episodes and specials of One Piece and a large chunk of Dragon Ball Super—knows what the audience has seen before. He said as much in an interview on the movie’s official website, adding that he wanted to make the staging for each move special. To make this work, he had his staff animate established actions, from firing off a Kamehameha to going full Super Saiyan, in a way that matches how they would feel using them. It’s the perfect representation of a Dragon Ball fan becoming a Dragon Ball director while still running around on the playground and gleefully shouting at every other child within earshot.

That magic is apparent in the end result. Dragon Ball Super: Broly may be the 20th Dragon Ball movie overall, but it’s also the first of a new generation. If this is a portent of the future for the franchise, then the next time we meet this formidable foe we won’t be shouting “Broly … AGAIN?!,” we’ll be cheering; fists pumping and tattered shirts blowing wildly in the wind.