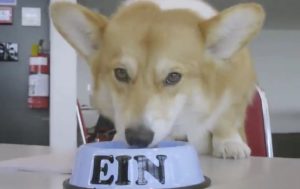 Just in case, for some reason, you were worried Ein wouldn’t be a good boy in Netflix’s live-action Cowboy Bebop series, some good news has arrived. The most important four-legged co-star made an appearance just in time for the first day of filming, and you can watch Ein’s entrance in all its Corgi-vision glory in a new video from the @NXonNetflix Twitter account.

Now all we need to see is Ed and we’ll be complete!