Extended In This Corner of the World, With 30 Minutes of New Scenes, Hits Japan This December 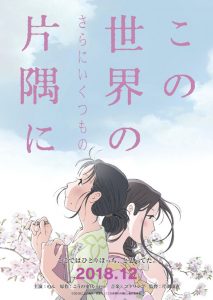 Last year, it was announced the hit 2016 film In This Corner of the World would be getting an extended version with new scenes.

Today, it was announced that new version will hit Japanese theaters this December, and feature approximately 30 minutes of new footage.

It’s also been given a new title, Kono Sekai no (Sara ni Ikutsumono) Katasumi ni, which translates loosely to In (Several More) Corners of the World.

Along with the announcement came a new visual and video teaser for the updated film.

The new scenes were directed by Sunao Katabuchi, and add material about characters like Rin, who appears briefly in the original, and main character Suzu’s little sister Sumi. It was also stated that this version will give the impression that Suzu is a more “grown up” character than in the original.

Suzu will again be played by Non, also known as Rena Nonen, and new music will be provided by Kotoringo, who did the theme for the original film.