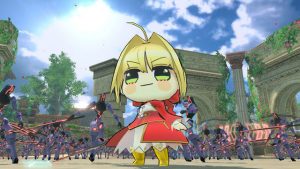 When Fate/Extella Link makes its Nintendo Switch debut in Japan, it’ll have some fun little extras for fans of the series. As grim as some of Fate‘s events may be, the Switch version of the hack-and-slasher is introducing Funifuni costumes, which offer up chibi takes on characters like Nero, Altera, and Tamamo-no-Mae.

Fate/Extella Link hits Switch in Japan on January 31, and the PS4 and PS Vita versions are coming to North America and Europe in Q1 2019. While there’s currently no word on localization for the Switch port, players on other platforms won’t be left out in the cold. The Funifuni mode outfits are also coming to PS4/Vita as DLC for ¥500.

Check out a trailer for the Switch version, followed by another look at the goofy outfits below.