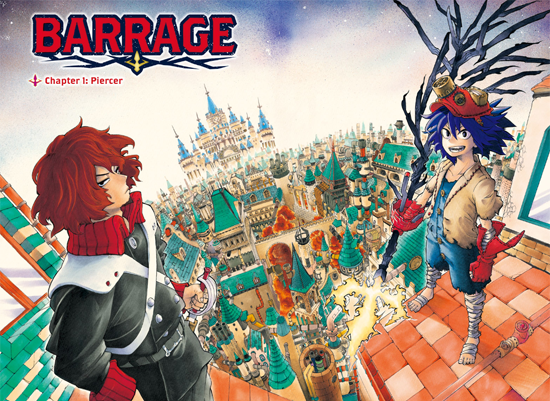 I really enjoy having a subscription to Shonen Jump Alpha, but I won’t lie and say I keep it going for anything other than One Piece. Sure, I’ve read series like Naruto and Bleach in the past, and I plan to catch up with Toriko at some point, but I can only realistically keep up with so many endless shonen sagas. That was one of the reasons that Rurouni Kenshin Restoration—Nobuhiro Watsuki’s latest Kenshin manga, which ties into the series’ live-action adaptation—was such a pleasant addition. A lot of us have read Watsuki’s original manga, but it’s nice to have something to dig into from the start in Jump. 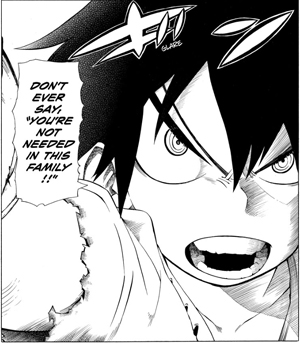 Now Viz has a second hook for new readers in Kouhei Horikoshi’s Barrage (Sensei no Baruji), a brand new series that has chapters running in the digital magazine two weeks after they debut in Japan. Here’s the lowdown and our first impressions of the manga.

Astro lives in the slums of Industria, and unlike what you would expect of someone so young, he’s got quite a few mouths to feed. No, he didn’t have kids at an obscenely early age, but he has the tendency to take needy children with nowhere else to turn under his wing. Thus, his already meager wages end up being even more of a pathetic pittance at the end of the day. Something’s gotta give, right?

A bit of dubious fortune ends up crossing Astro’s path unexpectedly, in the form of Prince Barrage, another boy who looks nearly identical. The Prince bumps into Astro, and offers him the opportunity to take his place as heir to the throne of Industria. Before Astro can get more than a few words out, Barrage saddles him with the Orgue—a royal relic that proves its wearer is the Prince—and is promptly gunned down. Now Astro finds himself being escorted back to the castle, ushered into an unfamiliar world of royalty.

Things don’t stay calm for very long. After some quick introductions to the King and those closest to him, Astro is confronted by an Alien Noble who accuses him (as Prince Barrage) of absconding with his wallet, using a previous encounter as leverage for obtaining the Orgue for himself. This eventually triggers the true power of the Orgue, and we get a brief, combative taste of what to expect from Barrage‘s action. I won’t spoil any of what goes down in the introductory chapter, but let’s just say Barrage successfully establishes its theme multiple times, offering a good sample of what we’re in for with its particular flavor of shonen in just a few hairs under 60 pages.

Barrage isn’t terribly original, but it has an entertaining enough start to be worth following. Horikoshi’s style is simple and clean, and despite the fact that we haven’t seen a ton of action yet, what’s here thus far is clear and easy to follow. The only character we really start to get a feel for at this point is Astro, of course, and it’s good that the focus stays on our lead rather than immediately scattering to ancillary cast members as so many series are wont to do right from page one. Like a lot of shonen, Barrage isn’t shy about repeating over and over what it’s all about—in this case much of Astro’s motivation stems from his views on family—and that’s ok. Hopefully Horikoshi’s series follows an interesting path as it continues its North American run in Shonen Jump Alpha.

Anyone else get a chance to read Barrage yet? Let us know what you think in the comments!