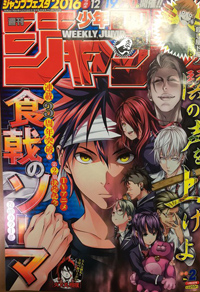 Remember when we told you a few days ago that an important Food Wars announcement was coming December 14?

Make that December 10, actually, because today we’ve got word that Food Wars will get a second season of anime.

That’s courtesy the cover of December 14’s Weekly Shonen Jump, which has gotten out a few days early. That same issue will also reveal a one-off anime featuring Food Wars’ Aldini brothers, which will be packaged with volume 18 of the manga. That’s due out May 2.

Not many more details about the anime’s second season as of yet, but if it’s anything like season one, it’ll run 24 episodes and be animated over at J.C. Staff.

All you people who guessed December 14’s announcement would be a second season, you win! Your prize: a big ol’ helping of food… wars.