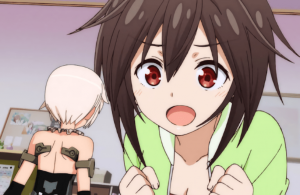 The Anime Fest @ NYCC event will be held alongside this year’s New York Comic-Con, which takes place at New York’s Javits Center from October 3-6. Fans of the Frame Arms Girl franchise will be treated to something special during the weekend, because Kotobukiya announced plans to screen the Frame Arms Girl: Kyakkyau Fufu na Wonderland anime film at the event on October 5.

There will be a panel featuring Kotobukiya staff and ProjectNuType founder and CEO NuType Tim to go along with the screening, which will be held at the Hudson Mercantile building in New York from 3:00pm to 5:30pm. Fans in attendance can look forward to a compilation of the Frame Arms Girl anime series with new footage.

Ao Gennai mistakenly opens a package that wasn’t meant for her, and, to her surprise, she sees a small robot named Gourai, a Frame Arms Girl who has an evolving personality. Confused as to how this little robot made it into her life, she finds out that she is the first person to activate her. She realizes taking care of Gourai is harder than she thought, especially when competitive fights are involved!