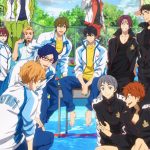 On October 21, all-new feature film Special Edition! Free! -Take Your Marks- premiered in Japan at the 3rd KyoAni & Do Thanks Event, and it apparently ended with a tease for more Free! According to reports from the opening, the end of the feature relayed the following message: “SEE YOU NEXT STAGE.”

The film’s wider release kicked off in Japan on Saturday. We’ll have to wait for more details on the nature of the next project.