Trailer for U.S. Release of Free! Take Your Marks Streamed

Free! Take Your Marks, the latest film in the Free! franchise, is headed to U.S. theaters March 14, and Funimation has just released an English-subtitled trailer.

Take Your Marks is the fourth Free! film (or the second, if you don’t count the Timeless Medley compilation films) and tells the tale of the boys as they struggle with the feels that come with graduating high school.

A theater locator and tickets are available over at Funimation’s official website.

Here’s how those fun folks describe the film:

Haru and Makoto are prepping to move to Tokyo, which means finding a new place to live! While they’re off searching, Nagisa, Rei, and Gou are left to come up with something big to enlist new Iwatobi club members. But can they fill the pool, or is the club’s future sinking fast?

Meanwhile, the boys of Samezuka are having their own time getting ready for the future! While Rin prepares for his move to Australia and Sosuke moves out of the dorm, Nitori and Momo want to do something big to thank their senpais. A visit to the hot springs should do the trick, right? But a misunderstanding about Gou could leave Rin unsettled, and only a challenge in the water will set his mind at ease!

If that doesn’t convince you, well, look at the adorbs photo below. 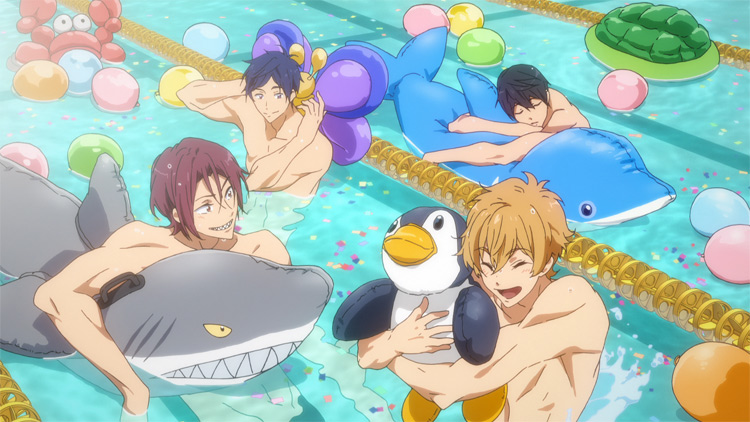