Have you always dreamed of being a mangaka? That’s never been an easy hurdle to leap. Heck, it’s hard enough for aspiring creators in Japan to get their foot in the door! Shonen Jump is giving the rest of us a head start of sorts, however, with the SJ Storyboard Contest, which offers the opportunity for genuine, professional feedback on a storyboard you create.

Before we get too far, though, it would be best to make sure everyone understands the concept of a storyboard. Shonen Jump looks no further than the pages of Tsugumi Ohba and Takeshi Obata’s Bakuman manga for a quick visual explanation: 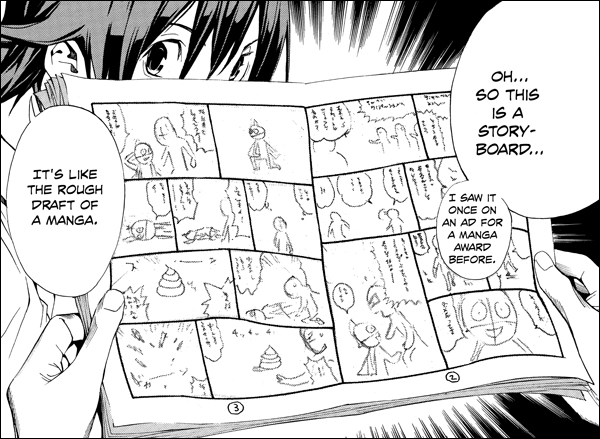 Your mission: come up with an interesting story using the following provided theme: “The summer adventures of a thirteen-year-old teenager who dreams of becoming a movie star in New York.” Then create four pages of manga-styled storyboard based on the concept developed. The deadline is August 15.

All of the relevant details can be found in the SJ Storyboard Contest announcement, including the awesome prize:

“One (1) grand-prize winner and three (3) runners-up will receive awesome prizes including art supplies and professional feedback from Shueisha’s Deputy Director of Shonen Manga Group and former Editor in Chief of Weekly Shonen Jump SASAKI Hisashi! Plus your work will appear in the upcoming Bakuman issue (December/January) of SHONEN JUMP!

The former EIC will also be present at Shonen Jump’s Mangaka Workshop panel at San Diego Comic Con, where early entrants—submitted before July 15—will have the chance to get LIVE feedback on their work. He will also be answering general manga-making questions during the panel’s Q&A session.

So, what are you waiting for? Get to creating!