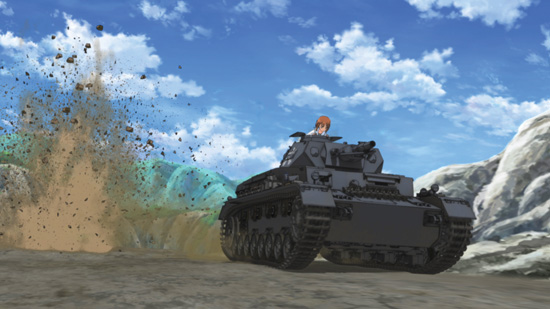 The noble machines of sporting martial combat roll across the landscape, sporting their insignia—here an anglerfish, there a fresh pot of tea—their maidenly crew carefully moving them in formation as they challenge one another in the glorious feminine martial art of tankery, to bring glory to their school-battleships and strength to their hearts.

Yes, Girls und Panzer is exactly what it says on the tin: it has girls, it has tanks, and if you aren’t immediately enraptured by the idea of girls competing in organized tank skirmishes as an extracurricular activity, there’s probably very little I can say to convince you otherwise. This is a show that begins on a solid note and, with each successive episode, slowly transforms into a work of sheer brilliance, turning what could easily have been a novelty one-note concept into a powerful story of courage and friendship. 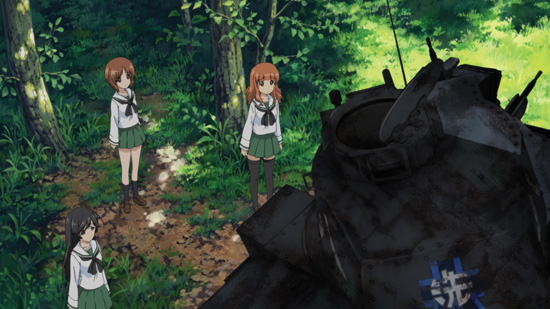 Girls und Panzer is primarily the story of Miho Nishizumi, the youngest daughter of the famed Nishizumi family, whose style of tank command is respected the world over. Miho wants nothing to do with tankery at all; her last match ended in disgrace and, rather than disappoint her family further, she has opted to enroll in Oarai Girls Academy, which currently lacks a tankery club.

Unfortunately for her, her enrollment convinces the student council to draft her as the commander of the club they’re planning to resurrect. It takes her new friends, both of whom are really eager to get started in the club, standing by her decision to not join the club for her to join the club. It’s a bit of convoluted logic, but it establishes the predominant theme of friendship and working together that courses through the entire series. 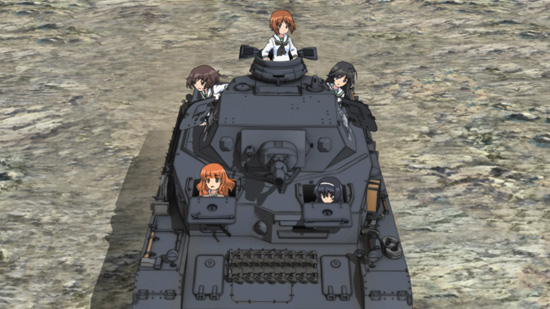 After the club forms, the members hunt down disused tanks laying around the city and form six teams to operate the tanks. Miho’s team, Anglerfish, serves as the primary focus, and her crew gets the bulk of the character development. Other teams get a bit of development, but generally they’re there to be entertaining and to provide a crew to pilot each tank during matches.

Girls und Panzer wastes very little time getting to the meat of the series, which is the tank matches. The Oarai teams have a scrimmage match with each other before facing the English school St. Gloriana’s legendary team. The matches themselves are tense affairs, complex tactics and strategy blended with exciting combat sequences. In true sports anime form, each match gets progressively more exciting, and there’s a real sense of progress among individual teams and between the teams of Oarai as everyone learns to work together and understand one another’s strengths and weaknesses. 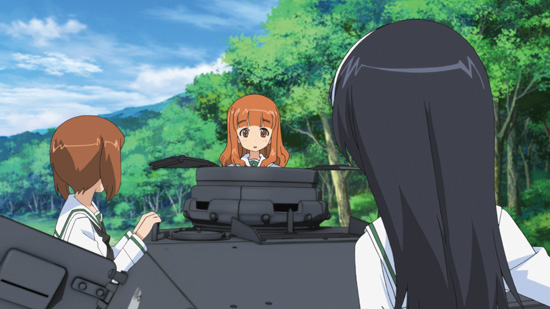 This is truly the most spectacular thing about Girls und Panzer: for their first original anime production, studio Actas took an idea that could have led to an amusing but frivolous series and played it completely straight. The tank matches are serious affairs: the girls use live ammunition (though the aim is to disable, not to destroy), and there is risk of injury. It’s an earnest series, and it rewards viewers who take the series seriously with impressive strategic maneuvering, especially in the final two matches.

The seriousness of the treatment also gives the series its strongest selling point, in the way it casually challenges and dismantles stereotypical gender roles. The recruitment video shown in the first episode stresses how feminine the martial art of tankery is: girls who practice it become strong women, courageous to lead on the job and at home. There’s even a (hilarious) point at which a few background characters joke about how absurd it is for boys to be interested in tanks. 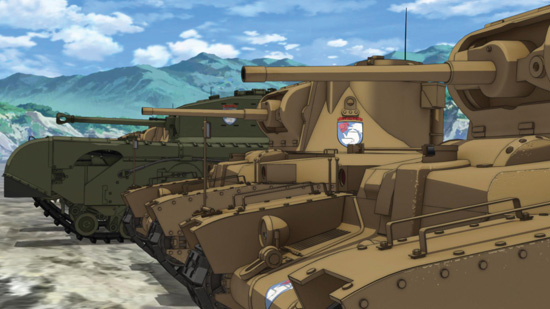 If Girls und Panzer weren’t played seriously, this would just feed straight back into traditional gender roles; the punchline becomes “girls operating tanks, because that totally wouldn’t happen.” But because it is played seriously, that reading falls apart: all the characters effortlessly blend the physical strength and mental acuity needed to participate in these tank battles with other, more stereotypically feminine personalities. And more often than not, Oarai wins its battles by blending typically feminine qualities like friendship and empathy with the cool tactical reasoning needed to succeed in a pitched battle. It’s a brilliant subversion made all the more important by doing so without resorting to the sort of cheap stereotypes of the superficially “strong woman” who ends up, at best, a token or bit player for the men in her story.

Production-wise, Girls und Panzer stands out as well. It’s arguably the first anime to make the best use of military history adviser Takaaki Suzuki (who also collaborated with the Strike Witches and Upotte! productions), as the tanks (rendered entirely in 3DCG) are extremely detailed and true to life. The CG itself blends seamlessly with the 2D digital cel animation, and the series maintains a consistent level of animation quality throughout; in fact, due to budget restrictions, the airing of the final two episodes was delayed by several months to give the studio time to do them justice. Even the direction itself—by first-time director Tsutomu Mizushima—has the air of impeccable precision around it, making Girls und Panzer a pleasure just by how smoothly and cleanly it moves. 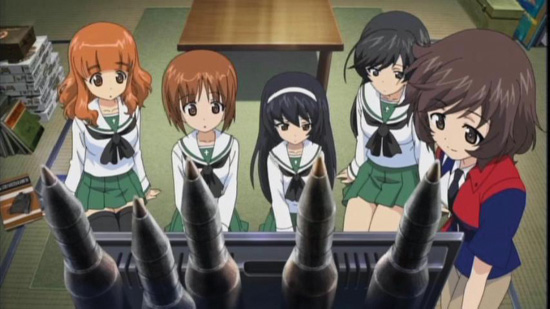 It’s always a bit of a treat when a consistently entertaining show rolls around, something that’s a highly accessible blend of drama and humor, and it’s even better when that show offers something different from the usual mainstream fare. Girls und Panzer is a rare kind of treat, offering up entertainment with a different look at culture simply by remaining earnest about its premise and world.

Anime “Gets Real” in BTOOM!
All Out!! Anime Adaptation Information Comes… All Out