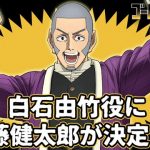 This April we get to check out the anticipated TV anime adaptation of Satoru Noda’s Golden Kamuy manga, directed by Hitoshi Nanba at Geno Studio. Ahead of that, the latest update on the series has a cast member lined up to voice one of the principal characters, “Escape King” Yoshitake Shiraishi.

The voice behind the character will be Kentarou Itou, who previously provided voices for characters like Naruto‘s Chochi Akimichi and Bleach‘s Renji Abarai.

If you missed the previous promo, here’s a look at the upcoming anime: