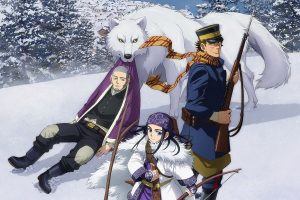 The first season of Golden Kamuy just ended, but fans didn’t have to wait long for confirmation of a continuation. As revealed at the end of the 12th episode, the adaptation of Satoru Noda’s hit manga will strive to survive even further when season two kicks off this October.

Crunchyroll already announced plans to stream the second season. Here’s how they describe the series:

The story takes place in the mighty Northern field of Hokkaido, the time is in the turbulent late Meiji Era. A post war soldier Sugimoto, aka, “Immortal Sugimoto” was in need of large sums of money for a particular purpose…. What awaited Sugimoto, who stepped into Hokkaido’s Gold Rush with dreams of making a fortune, was a tattoo map leading to a hidden treasure based on hints inscribed on the bodies of convicts in Abashiri Prison?! The magnificent nature of Hokkaido vs vicious convicts and the meeting with a pure Ainu girl, Ashiripa!! A survival battle for a hidden treasure hunt begins!