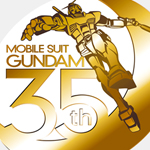 Something special is brewing for the 35th anniversary of Sunrise’s Mobile Suit Gundam anime. An anniversary site launched earlier today, commemorating the April 7, 1979 debut of the first TV anime series. While the exact date is a little under a month away, Sunrise has something cooking for March 20.

According to the website—which has a tagline that reads, “Rise! The World is Moving”—a new announcement will be broadcast live at 5:00pm JST (1:00am PST) on March 20. Fans can go ahead and start speculating what the announcement will be. It could have to do with the upcoming Gundam: The Origin anime, Creator Yoshiyuki Tomino’s new anime, or something else entirely.