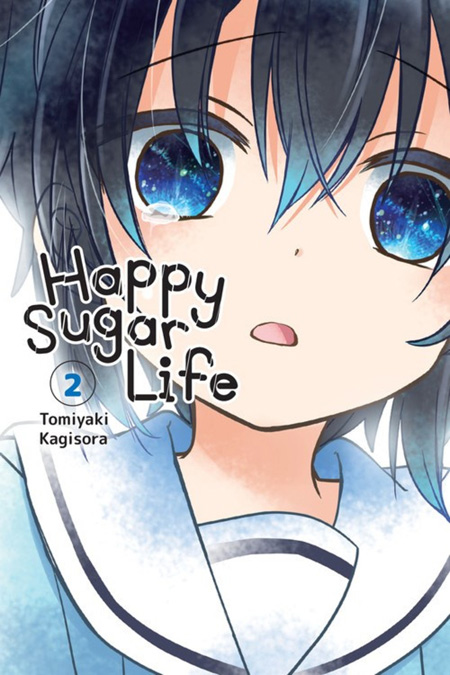 On the surface, Happy Sugar Life looks like a generic cute shojo manga, and the back cover copy doesn’t shed a lot of light on the actual plot. But this twisted thriller is basically Dexter as shojo manga. Satou Matsuzaka seems like a typical high school girl, despite a reputation for being a little loose. She works at a maid café, supposedly lives with her aunt, has friends, smiles and laughs, and is popular in school. Underneath that veneer, however, is a sociopath obsessed with her twisted notion of love. We learn that Satou “found” a little girl named Shio on the streets and basically kidnapped her. Now Shio is Satou’s whole world and she’ll do anything to keep Shio safe, including murder. The two live together an apartment that Satou apparently killed to acquire.

The adults in Satou’s life, from a depraved boss who sexually harasses one of Satou’s co-workers to the pervy teacher at her high school, provide her with plenty of opportunities to unleash her murderous side. Satou proves a remorseless match for all of them. She easily maneuvers the murky waters of threats and blackmail. Meanwhile, the question looms: Where exactly did Satou get Shio? Did she really rescue the girl from the streets, or did she kill Shio’s parents? A clue comes in the form of a seemingly homeless boy posting fliers for the missing girl. Either way, nothing will stop the implacable Satou from protecting the world she’s built for herself and her love.

Kagisora’s beautiful art in Happy Sugar Life provides an ironic counterweight to the disturbing plot. All the visuals are firmly within the realm of shojo, from the cute characters to the delicate linework and floral screentones. But the art goes dark in appropriate places, highlighting the thriller aspects of the story. The first volume lays a solid foundation for future plot lines; fans of mysteries, serial killers, and crime drama will find a lot to love. 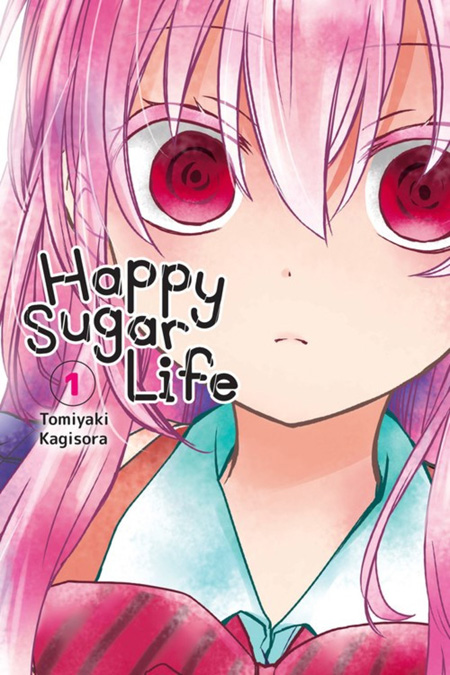 One flaw, though it remains to be seen how crucial it will be as the series goes on, is the character of Mitsuboshi. He was sexually abused by a female boss and the experience “ruined older women” for him, causing him to set his sights on the underage Shio instead. Just once, it would be nice if a manga-ka took Psych 101, because it’s understandable that Mitsuboshi would be traumatized, but that wouldn’t turn him into a pedophile. That concern aside, Happy Sugar Life promises to be a dark ride. Readers looking for shojo manga with an edge are urged to check it out.