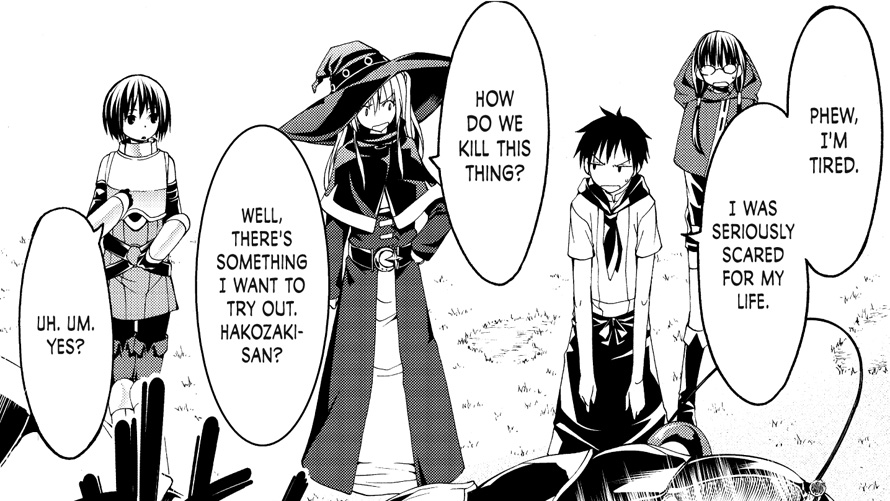 Yotsuya, a loner high school student who just wants to stay at home and play video games, finds himself suddenly teleported to a fantasy world where he must kill monsters for XP to survive. Luckily, two girls from his class are sucked in as well, and all of them are randomly assigned RPG classes. Shindo, the popular hot girl, becomes a wizard, Hakozaki, the shy girl with health problems, becomes a warrior, and Yotsuya becomes—surprise!—a nearly powerless farmer! The freakish, naked “Game Master” explains the rules of the game: they’re all immortal and will resurrect from death in 30 seconds, unless all three are dead at the same time, in which case they stay permanently dead. With no swords or spells, just brains, can Yotsuya survive in his dangerous new reality and help keep his teammates alive as well? 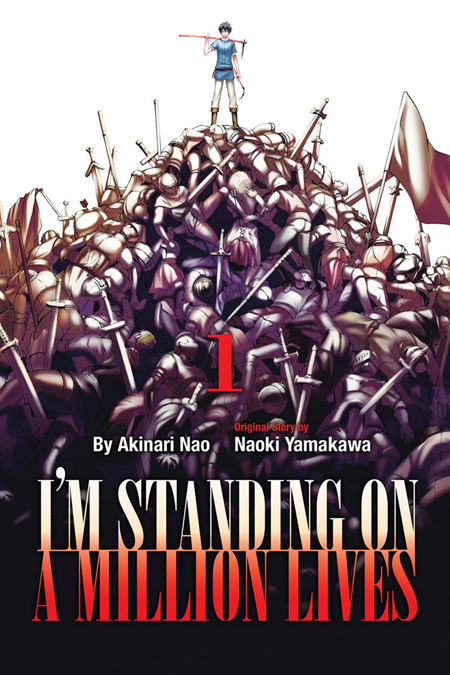 Just when Yotsuya is getting used to fighting monsters with farming tools, he and his friends are teleported back to their own world, where the “Game Master” shows him an ominous vision of the future: his team fighting a giant dragon in real-world Tokyo. Soon our skeptical hero is wondering: Is the “fantasy world” really fantasy, or some kind of futuristic super-science? And does he even want to save Tokyo from a dragon, or is he too antisocial to care? (“I hate Tokyo and I despise all the people living in it!”) But his real-world respite is short lived as he’s pulled back to the RPG world, along with more and more female classmates, to face even tougher monsters and quests …

Based on a light novel series, Million Lives combines isekai fantasy tropes with the gory sci-fi deathmatches of Gantz, plus interesting speculations on how the “NPCs” of a fantasy world might react to otherworldly immortal heroes among them (“I want you to train with me! Since we won’t have to worry that you might die, I can use my sword to cut you to ribbons!”). It’s a clever page-turner, despite moments of forced edginess (again like Gantz, though it’s only 16+ instead of 18+). It’s just too bad the art is so generic and mediocre.

Japan in Danger of Losing Skilled Animators to China?
You’re My Pet [Review]