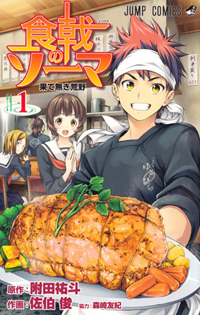 Are you a fan of Food Wars? Keep an eye on this space, because a big Food Wars announcement is due December 14 in Weekly Shonen Jump, the magazine in which Food Wars is serialized.

The announcement will come alongside some special color pages of the manga and mark its third anniversary.

Food Wars: Shokugeki no Soma, written by Yuto Tsukuda and illustrated by Shun Saeki, tracks the life of culinary wiz kid Soma Yukihira, who learns the ropes from his restaurant-owning father before entering a legendarily difficult culinary school.

An anime adaptation of Food Wars ran from April to September of this year.

What is this announcement business all about? A new anime adaptation? A live-action film? A tie-up with Star Wars (hey, they both have “wars” in the title…)? We’ll find out December 14. Until then, let’s get speculatin’!

Seven Seas Adds My Girlfriend is a T-Rex Manga
Kono Manga ga Sugoi!’s Best Male and Female Manga of 2015 Are…