An Incurable Case of Love [Review] 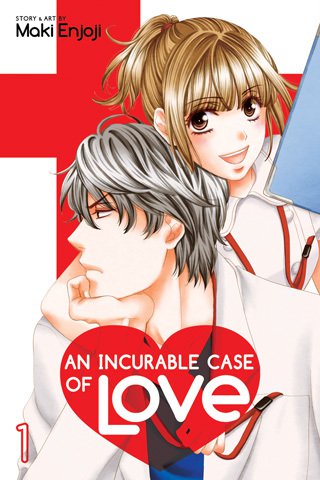 Five years ago Nanase Sakura was trying to help a hurt elderly woman on the street when a young doctor swooped in to save the day. So impressed with the experience (and the handsome doctor) Nanase went into the medical field to become a nurse. Now that she’s graduated, she’s purposefully gotten herself hired where the doctor, Kairi Tendo, works.

She thinks she’s in love with him. He doesn’t even remember her. So when she confesses her undying love to him, he just asks if something is wrong with her head.

It gets worse. Though Dr. Tendo is beloved by his patients and gets along with some of the staff, other people at the hospital hate working with him. Soon Nanase thinks he’s cold and harsh and nicknames him “The Dark Lord.” Then she finds out that he lives next door to her at her new apartment!

Then Dr. Tendo sees Nanase save people’s lives and starts to respect her more. Nanase gets more ambivalent about her feelings toward him, because now she’s seen both his unpleasant side and his heartthrob side.

An Incurable Case of Love is obviously an escapist romantic fantasy not meant to be taken literally. But because it takes places in a hospital — and characters do die — it gives it more complexity and darkness than it might have otherwise. That said, it’s still a comedy, even if it has serious moments. In this first volume we’re still getting to know Nanase and Dr. Tendo just as they’re getting to know each other. Nanase is flighty but smart and Dr. Tendo is more of a mystery.

VIZ previously released another of mangaka Maki Enjoji’s series, Happy Marriage?!, which is similar in style and art as An Incurable Case of Love. Fans of Happy Marriage?! would probably enjoy checking this out as well. Unlike most romance manga in America, this is aimed at adult women, not teenage girls. It’s nice to see published manga expanding into more age ranges.