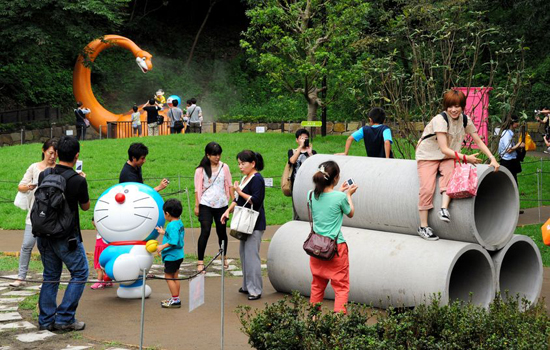 It’s been a big week for Doraemon, the beloved time traveling robotic cat, and his creator, the late Fujiko F. Fujio.

Doraemon, who has never really caught on in the west but is a household name here in Japan, was manufactured in the original manga on September 2rd, 2112 – hence a series of 100-year early birthday tributes throughout Asia, including a video courtesy Google Japan, recognition as an official resident by the city of Kawasaki, and even an exhibition in Hong Kong.

September 3rd also marked the first anniversary of the Fujiko F. Fujio Museum, a museum dedicated to the works of the late creator of Doraemon. Fujiko F. Fujio (1933-1996), whose real name was Hiroshi Fujimoto, was one half of a manga-writing duo who collectively called themselves Fujiko Fujio, but when working alone, used the monikers Fujiko F. Fujio and Fujiko Fujio A (confused yet?). The museum, based in Kawasaki, recently attracted its 500,000th visitor, well in time to celebrate Doraemon’s birthday.