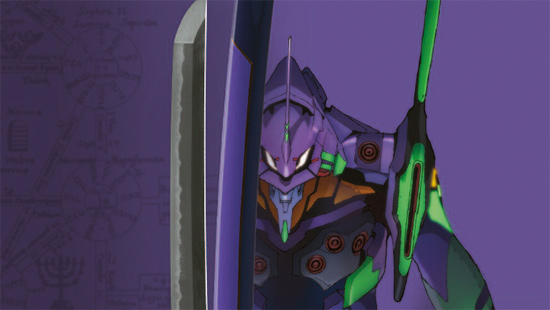 Japanese Prime Minister Shinzo Abe was in France on May 5 for a meeting with French President Francois Hollande, where the two leaders agreed on the importance of further diplomacy with Russia and a swift resolution to the crisis in Ukraine. And then Abe went and looked at some Evangelion swords.

Yes, Abe found time in his busy schedule to pay a visit to the Japan Cultural Institute in Paris, which is currently playing host to the Evangelion and Japanese Swords exhibit. That’s the one that features traditionally made Japanese swords inspired by Evangelion plot points like the Lance of Longinus, which might prompt you to say “hey, that’s a lance, not a sword” but then I would direct you to a picture of this one sword from the exhibit with an EVA-01-inspired hilt and we would both walk away happy.

While visiting the exhibit, Abe commented to reporters, “This collaboration between modern day anime and traditional Japanese swordcrafting is yet another way of broadcasting Cool Japan to the world.”

So there you have it folks. Cool Japan: a bunch of swords inspired by a robot cartoon from the 1990s in a museum.

Paris is just one stop on Abe’s six-nation tour of Europe, and the sword exhibit’s not done, either. It’ll be running in Paris until June 21, and from there it’ll be relocated to the ABC Museum of Madrid from July 5 to September 28, followed by one last relocation back to the Mori Art Museum in Tokyo.