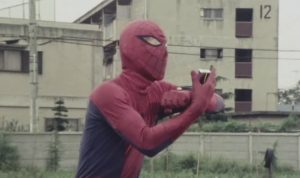 Those who have seen Toei’s 1978 tokusatsu spin on Marvel’s Spider-Man know just how charming and ridiculous the live-action series is. From biker protagonist Takuya Yamashiro to his awesome transforming ship that becomes the giant robot Leopardon, he should probably be the one that now dominates the MCU, but at least he’ll get a chance to shine in the upcoming sequel to Spider-Man: Into the Spider-Verse!

Spider-Verse 2 was recently announced for an April 8, 2022 premiere, and the original reveal was paired with a bunch of different Spider-Man insignias. One was immediately recognized as being similar to the Japanese Spider-Man logo, so a fan decided to ask producers Phil Lord and Christopher Miller about it.

Lord was pretty quick to reply with a succinct, “He’s designed!”