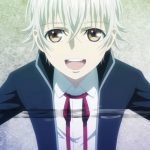 The K franchise is getting a six-part anime film series in the form of K: Seven Stories, and Viz Media announced the license of the features during its Anime Boston panel over the weekend. Now that we know they’re coming to North America at some point, we can eagerly anticipate the first entry’s July 7 Japanese premiere in a new promo.

The latest 90-second preview shows off more footage from the film series, including a sample of the opening theme song, “SURVIVE!,” performed by angela.

After “R:B ~BLAZE~” kicks things off on July 7, here’s the schedule for the films that follow: