Smart, dedicated, secretly ruthless poor girl Mary Saotome has earned a scholarship to Hyakkaou Academy, a high school for the ultra-wealthy. Only after enrolling does she discover that Hyakkaou allows gambling and the school culture is based on betting enormous amounts of money and turning the losers into “housepets” who have to serve the winners. (“A teenage girl, excited about opening an illegal gambling den … this school is nuts.”) Too poor to buy into the games, Mary is doomed to become a pet, as is her old classmate Tsuzura, who has plenty of money but no brains or spine. But together they just might be able to take on the school’s top gamblers. As Mary declares, “We’ll beat every single stuck-up rich kid in this academy! We’re gonna be the winners from now on!”

Kakegurui Twin is a prequel to Kakegurui, by the same writer but a different artist, and is essentially the same manga focused on a different group of characters. Much time is spent describing the rules of the school’s many games of chance, the 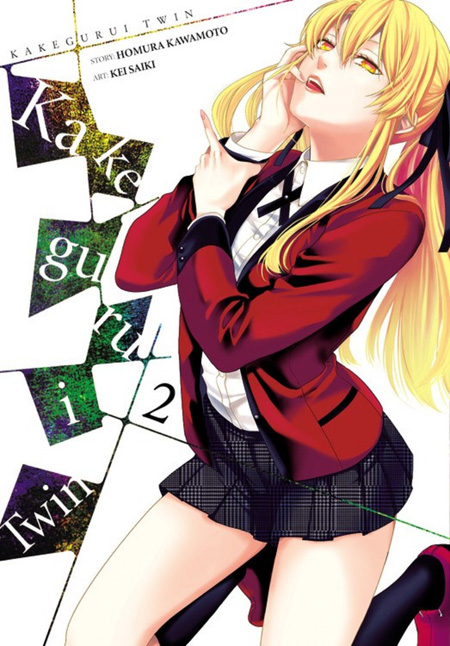 mathematical and psychological principles Mary uses to manipulate probability and beat the table, and the methods of cheating employed by her rivals. Soon she’s set up her own classroom casino and is attracting the notice of the gambling geniuses in the student council, who introduce her to ever more complicated levels of the school’s political machinery.

How can a manga that’s mostly about card and dice games merit an Older Teen rating? Incredibly pervy art, of course! Though there’s no actual nudity or sex, the manga’s BDSM subtext is a whisper short of being text, with “housepets” in collars and leashes, girls licking each others’ shoes, girls being choked and enjoying it, and countless shots of triumphant, sneering girls shot from below. (There are male students, but the manga barely cares about them.) This school is indeed nuts. But for readers who are equally interested in introductory game theory mathematics and kink, and I know you’re out there, this may be the perfect manga.