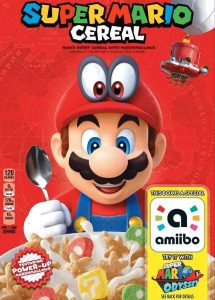 Cereal makers Kellogg’s have confirmed they’ll be releasing a Super Mario cereal in the U.S., the first such product in 28 years.

The confirmation from Kellogg’s came after a cereal blog called Cerealously (yes, this exists) reported rumors of the cereal’s imminent release.

According to an image of the box found online, the breakfast treat will be “mixed berry” flavor and include “power-up” marshmallows. According to that same image, the box serves as an Amiibo that unlocks content in Super Mario Odyssey.

From 1986 to 1989, cereal maker Ralston released a cereal called Nintendo Cereal System. The box included two different bags containing cereals based on Super Mario Bros. and The Legend of Zelda. A box of the discontinued cereal sold on eBay for $200 in 2010.