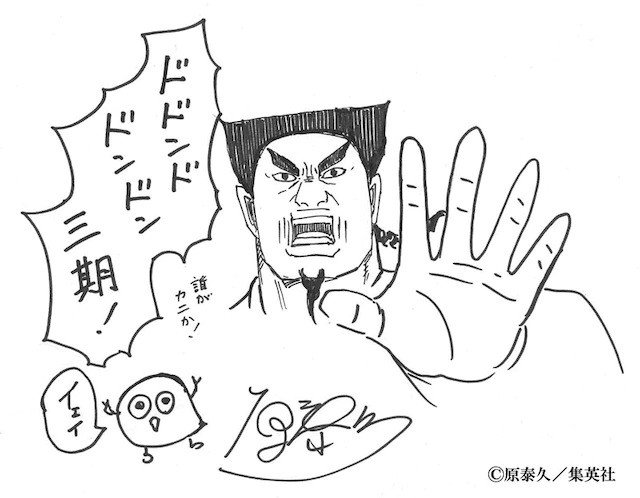 The Kingdom anime, based on Yasuhisa Hara’s long-running manga, is getting a third season.

That’s the word from Hara himself, who drew a new image to celebrate the occasion.

Hara himself will supervise the new anime. It will not be produced by studio Pierrot, which animated the first two seasons. However, the series’ main voice actors will reprise their roles.

Aside from anime, the manga was also adapted into a live-action film this year.

Shin and Hyou are war-orphans in the kingdom of Qin. They dream of proving themselves on the battlefield until the day Hyou is captured by a minister. The boy manages to escape and return to his village, but he is badly injured. Shin then meets a mysterious youth who bears an eerie resemblance to Hyou—a boy who will one day become emperor!

And here’s how Amazon describes season 2:

One year has passed since Xin and his allies successfully returned Zheng to his place on the throne. Now, the Kingdom of Qin must turn its attention to a larger battlefield and a loftier goal—uniting all of China under one ruler.

With a scrappy squadron of 300 men at his command, Xin begins to rank up achievements on the battlefield as he gets another step closer to becoming the world’s greatest general—but he’s not the only one. As the war between the Kingdoms of Qin and Wei intensifies, he meets two other young squad commanders whose skills rival his own.

While Xin struggles to stay one step ahead of the competition, Zheng begins fighting his own war against political enemies who’ve appeared within the castle walls. Will the young King be able to keep hold of his throne, or is history doomed to repeat itself?