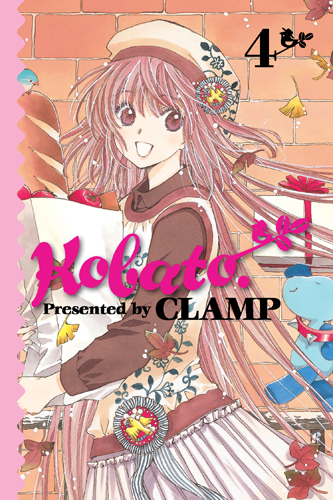 The fourth volume of Kobato starts off feeling much like the past volumes. That’s not a bad thing, but it feels as if nothing new is going to happen. Kobato is going to continue trying to fill her bottle so she can get her wish granted; the stuffed animal Ioryogi-san will continue to be rude and uncouth; and the kindergarten will still need to be saved.

Well, all those things remain true. But partway through the fourth volume, things get a lot more interesting.

In the third volume, there was the threat of the yakuza, so I figured that’s where the story was going next. Instead, this volume delves into otherworldly activities, and we finally learn why the heck there’s a talking stuffed animal in this series.

We get a lot of our information from a conversation between a bear and a fox-thing. They start more or less gossiping, saying how Ioryogi-san is stuck in the human world until Kobato gets her wish because “that’s his contract with God.”

Tellingly, though, changing Ioryogi-san into a stuffed animal didn’t make his attitude any better.

In this volume we also learn that Kobato has less than a year to fill up her bottle, so that brings more urgency to the story. Yes, volume four is definitely a key volume and very interesting. There’s still some yakuza stuff in there, but not much. It mostly gets pushed aside by all the other things going on. Kobato herself is on and off in this volume, sometimes there, sometimes not.  When we do get to see her, she remains her spacey but well-meaning self.

I like the newly announced information on the different worlds, because stuff like that is always fascinating to me. It also gives CLAMP a lot to play with. Since their story isn’t based on reality, they can really go wherever they want with this.