Land of the Lustrous is one of the most wholly unique shows in modern anime history. 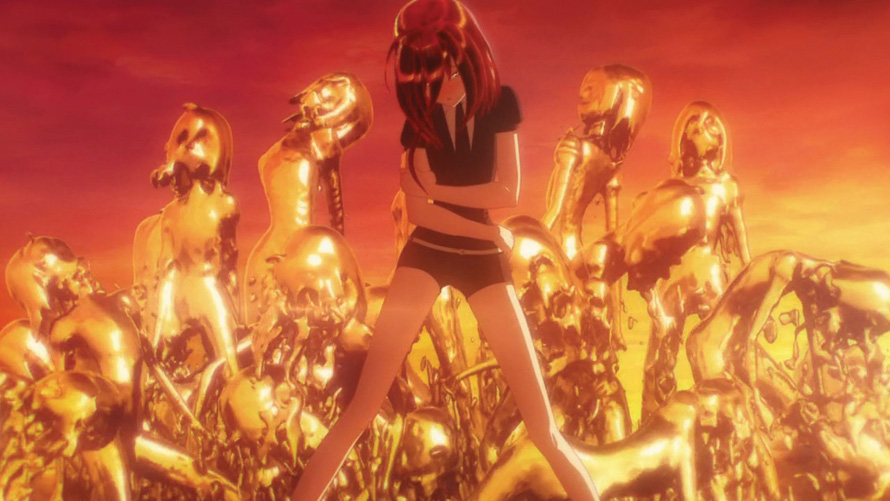 What would a land of beautiful, shimmering gem people look like? Surprisingly, you need only look toward Houseki no Kuni, or the thoughtfully named Land of the Lustrous, to find that answer. The visually arresting series with eye-popping hues and a collection of alien gem people is one of the most unique series to come out of the last few years.

Don’t call it “anime Steven Universe,” though. While the comparisons would be apt, these two series are worlds apart. Haruko Ichikawa’s excellent series is much more, and a unique jewel (pardon the pun) in the crown that is modern anime. It’s dazzling and daring and deserves your time and attention. 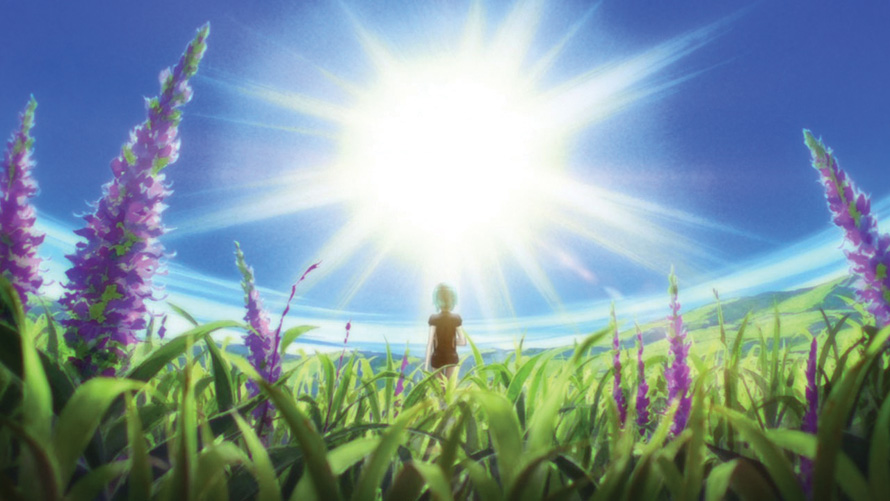 Land of the Lustrous is one of the most wholly unique narratives in the spread of modern anime, and for good reason: It follows a set of jewel people who inhabit a strange, seemingly post-apocalyptic land that seems as though it’s pulsing with vibrancy and life, despite the fact that these gem folks are apparently all that’s left out there.

There are no humans left in the world, though there are 28 different gem people, all living under a monk-like man known as Sensei, though his name is Master Kongo. He’s also a gem person,and could fall victim at any time to many of the same dangers the gems themselves could over the period of the series. Sensei is the only male-presenting gem person in the series, as the rest all feature they/them pronouns. 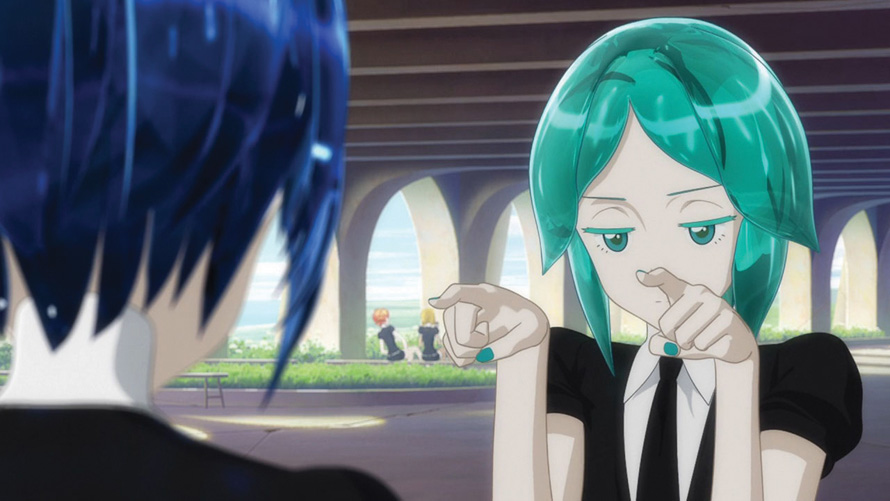 The main character is a gem named Phosphophyllite, who goes by “Phos.” Phos is extremely fragile and isn’t able to jump into battle like their compatriots, and as such is given a less action-packed job to perform: compiling an encyclopedia of the world around them, and the lives the gem people live together. They aren’t exactly thrilled with this task, but it’s all that’s appropriate, being as Phos would just break if tested in real combat.

Still, they want to be at the center of the action and fighting against the Lunarians. And what fights they are. Land of the Lustrous doesn’t shy away from potentially disturbing visuals, either. In just the first episode we see poor Phos nearly shattered after they brushed up against Kongo during a scuffle with the Lunarians. It’s a pretty jarring sight, seeing a character in pieces moments after meeting them, but it’s a common sight in the show, and just one of the things that gives it the unique look and foreboding feel. 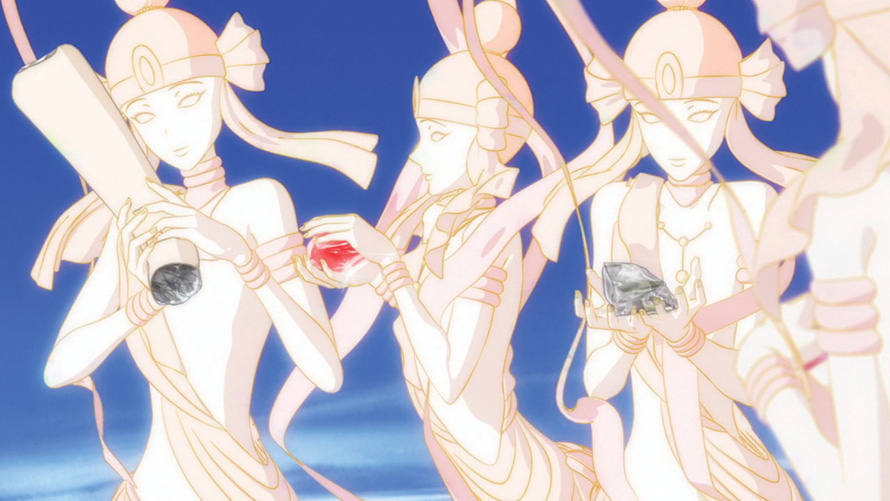 Luckily, shattering isn’t as big of a malady in Land of the Lustrous as it is in Steven Universe, where it means certain death. A gem doctor named Rutile can piece those who have literally fallen apart back together again, though missing body parts do mean missing memories—other gem pieces can be used to recreate broken bodies, but it’s not always for the best.

Out of the 28 gems, there are a few very important ones, such as Cinnabar, a gem who lives a bit of a lonely life due to the corrosive mercury they release and taints the memories around them. It can erase memories, so Cinnabar is careful who they get around and spend time with so as not to cause any harm. Jade and Euclase work with Kongo, Diamond is one of the hardest jewels around, and Bort is the most durable, period. There’s a variety of different gems, each with names you’ve likely heard before, such as Amethyst and Zircon. They all have their own unique personalities, specialties, and ways to fit in with gem society. But while the protagonists are at the core of the story, the enemies make it glitter in some interesting ways. 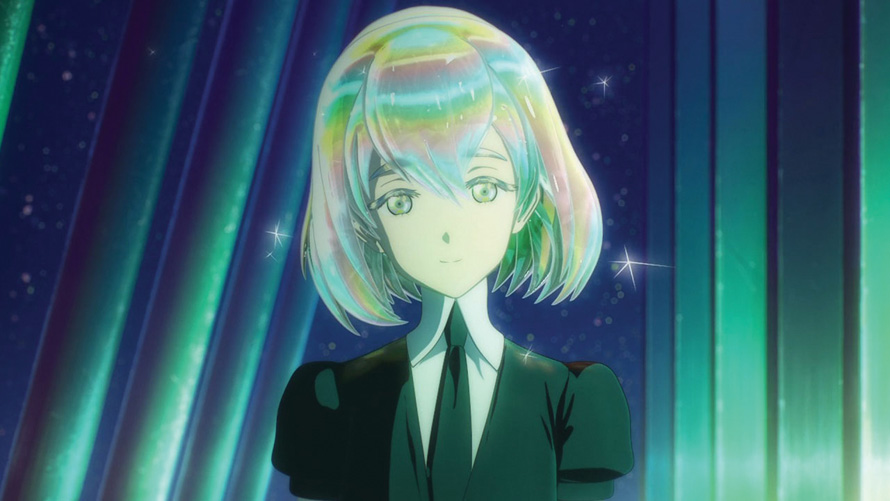 The world’s dangers are numerous, though none so terrifying as the Moon People, or the Lunarians. Much like the Draags of the surrealistic French classic Fantastic Planet, who keep the humanoid Oms as pets, the Lunarians apparently seek out the gem people simply because they like collecting pretty things. There’s no telling when one will appear, and they’re heralded by odd fractal-like designs in the sky called Sunspots. Eerily, the grow into beautiful creatures reminiscent of Buddhist illustrations, carrying fans and dancing in haunting patterns. Their appearance is anything but beautiful, however. They seek to retrieve their gem targets by any means necessary.

Their first appearance is particularly haunting, as one of them has the top of its head lopped off, like a hot knife through butter. Missing half a head doesn’t stop the Lunarian one bit, and instead the monstrous being simply slides bejeweled arrows out of its head cavity for the rest of the Lunarians birthed from the Sunspot to shoot at the gem people—made out of the very same gem being they took with them the last time they “visited.” 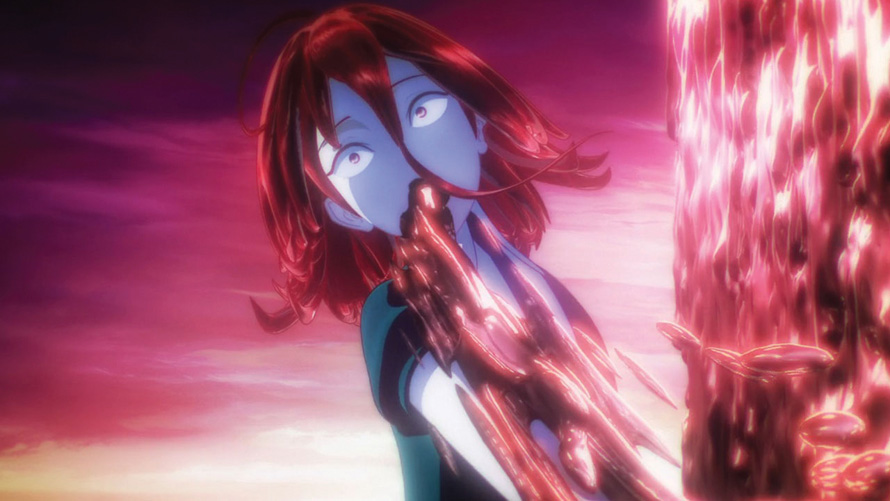 It’s clear that the Lunarians care little for the gem people or see them as anything but resources to bleed dry, and as long as they have what they come to the planet for, they can leave happy and with gems to coddle and cover the surface of the moon in. It’s pretty sick, but it’s also something of an allegory for the way many treat animals and the Earth as a whole—its more difficult to watch here for some, perhaps, since the gems have humanoid forms. It certainly doesn’t make things any easier.

But there’s one gem that actually has a dark secret: They want to be taken to the moon. Without revealing who it is, it’s an important plot point that’s unraveled as the series wears on—and it’s the crux of seeing the relationships between the gem people ebb and flow, which is undoubtedly the best part of the show. 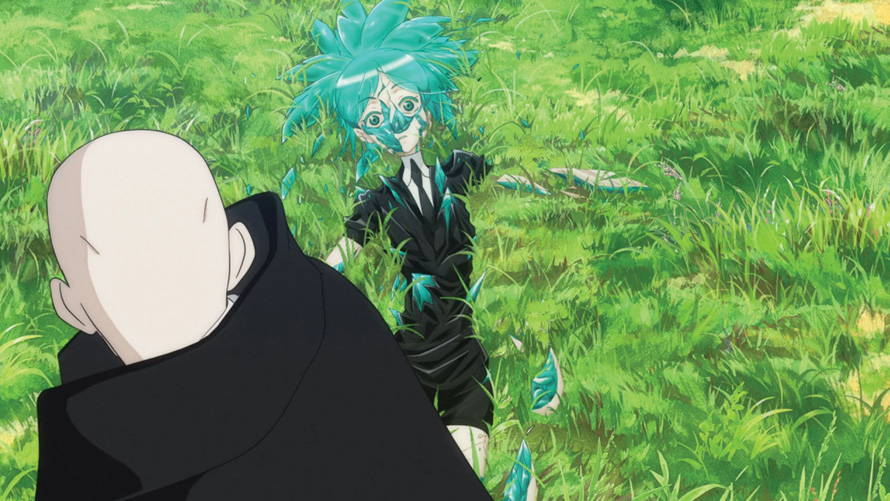 Land of the Lustrous utilizes CG animation, which can result in some unnatural movements at times, much like the newest seasons of Berserk, but it actually works quite well here. The gems’ colors pop, and while they all share the same general body types, their hairstyles and “skin” tones make for some arresting visuals. The rest of the environments follow suit, especially the grass and other sweeping landscapes. As previously mentioned, the Lunarians make for some disturbing yet exciting appearances in their own right.

All of these elements combine to make for a slice of dazzling entertainment, bookended by allegory and exciting tales that stem from a unique premise and cast of characters. If you’re intrigued by the idea of gem people living on their own and fighting off invaders from the moon who essentially want to use them as jewelry, Land of the Lustrous is undoubtedly a show you need on your radar.

Land of the Lustrous is available from Sentai Filmworks.