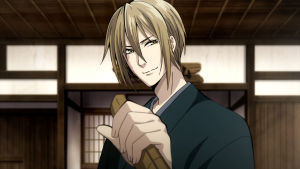 ELEVEN ARTS Anime Studio is handling distribution, with the third part to follow sometime next year. While we wait for that, check out the official English trailer below, and head to the website for theater and ticket info.

Part 1: One year has passed after the great battle against the “Orochi” (gigantic snake). Kumou Tenka had been paralyzed from the final battle and he took part of the government’s human experiment before the battle. Tenka withdrew himself from society but his younger brothers Soramaru and Chutaro find outs the secret past about their older brother.

Part 2: Fuuma ninja clan is a secret ninja tribe that is waiting for the “Orochi” (gigantic snake) to resurrect for generations. The tragedy of Shirasu and his twin brother Ichiu who grow up in this viscous environment and how they become the leaders of the clan.

Japanese Fans Rank the Coolest Manga Heroes of All Time
DOUBLE DECKER! Anime Gets Ready for Fall with New Visual