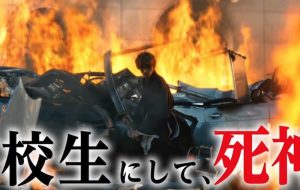 Curious about how the live-action film adaptation of Tite Kubo’s Bleach begins? The Warner Bros. YouTube channel streamed a couple minutes from an early scene, which faces Ichigo with the fact that he’s going to have to become a Soul Reaper and take down a Hollow himself.

Bleach opened in Japan to a somewhat underwhelming performance, landing it at #4 for its debut weekend. Its U.S. premiere is this weekend at New York’s Japan Cuts Festival, and you can see the early peek below.