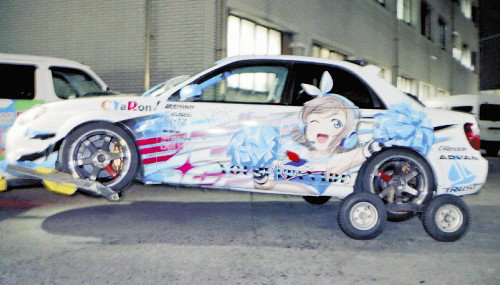 This weekend in Numazu, Japan, a female pedestrian was hit and knocked over by a car, which then sped off. The driver didn’t get far, though, because his car was, shall we say, distinct: it was painted with a character from Love Live Sunshine.

The incident occurred at about 5PM, when the car turned right and hit a 79-year-old woman who was crossing the road, knocking her over and breaking her wrist. The driver then fled the scene.

A couple in their 60s called the police, describing “a car with a girl drawn on it.” The car was found soon thereafter a few hundred yards from the scene. The driver, a 23-year-old man, has confessed.

Numazu, in Shizuoka Prefecture, Japan, is the setting of Love Live Sunshine and the site of a series of unrelated Love Live crimes this year.