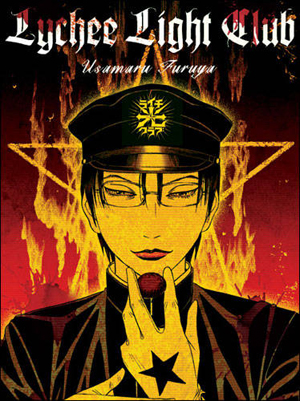 Here’s a fun game to play: Present someone with an especially innocent-sounding synopsis of Usamaru Furuya’s Lychee Light Club. It’s surprisingly easy, and just as surprisingly entertaining. Here goes: Lychee Light Club centers on a group of friends from an all-boys school. Together they run the Light Club with one goal in mind: to meet a girl their age. Having no experience with the opposite sex, the boys build a robot that runs on lychee and task it with fetching their one desire. Awwww…

It almost sounds playful; a coming of age tale built on discovery, humanity and a little bit of love. Once you hand over Vertical’s release of Furuya’s tale, however, they’ll be in for a real shocker. So yeah, make sure they’re at least 18 before you pull the wool over their eyes…

In actuality, Lychee Light Club is a very dark and twisted tale of the titular club, which was originally started by three best buds, Riku Kaneda, Katsuya Tabuse, and Hiroshi Tamiya, who would take his place as their dear leader. Somewhere along the way, though, things went woefully astray. Now the club is shadowed beneath the oppressive presence of a classmate they affectionately call Zera. Zera! Zera can do no wrong! Zera has the boys of the Light Club under his thumb, and his wicked ways will eventually spell doom for them all.

But first there’s the bit about that darn robot. The ultimate creation of the club, Lychee runs on the fruit after which it is named. With every member contributing a little something to its creation, Lychee is brought to life, educated in the ways of beauty and general aesthetics, and sent off about town to procure a young girl their age; a Frankenstein’s Monster of questionable concern. A few missteps later and he’s done it, the boys have their precious jewel, and Zera intends to keep her as a centerpiece of the club.

Only it doesn’t stop there. More girls are ‘napped from the streets, and the things that occur in the club as a result are most definitely not beyond reproach. From the very start Zera is more or less an obsessive, paranoid maniac. While he pushes for their Light Club—a group that as a whole shuns adulthood like some sort of unspeakable, yet potentially avoidable plague—to fulfill their Lychee-powered goal (as vague as it may be to most), his true concerns lie in deducing who will attempt to usurp him. Someone in the club will betray him, no doubt, and if he has to pit everyone against each other to figure it out, then so be it.

The way the manga is executed—from the dramatic layouts and reveals to the minimal settings—makes even more sense once you learn that it was adapted from Tokyo Grand Guignol’s play of the same name, which was directed by troupe leader Norimizu Ameya. Interestingly, Furuya’s adaptation has since been adapted into a play itself, creating a curious, recursive image of this diabolical tale.

Lychee Light Club is unflinchingly graphic, and as such it requires a certain taste of its audience. Those who can stomach its depravity will be amply rewarded. Furuya’s grimly elegant style is heavily influenced by that of Suehiro Maruo (Mr. Arashi’s Amazing Freak Show, Last Gasp‘s upcoming release of The Strange Tale of Panorama Island), who was actually in the original Lychee Light Club cast. It’s a perverse kind of beauty, as visually bold and exploratory as its subject matter. One thing’s for sure, you’ll never look at lychee the same way again.