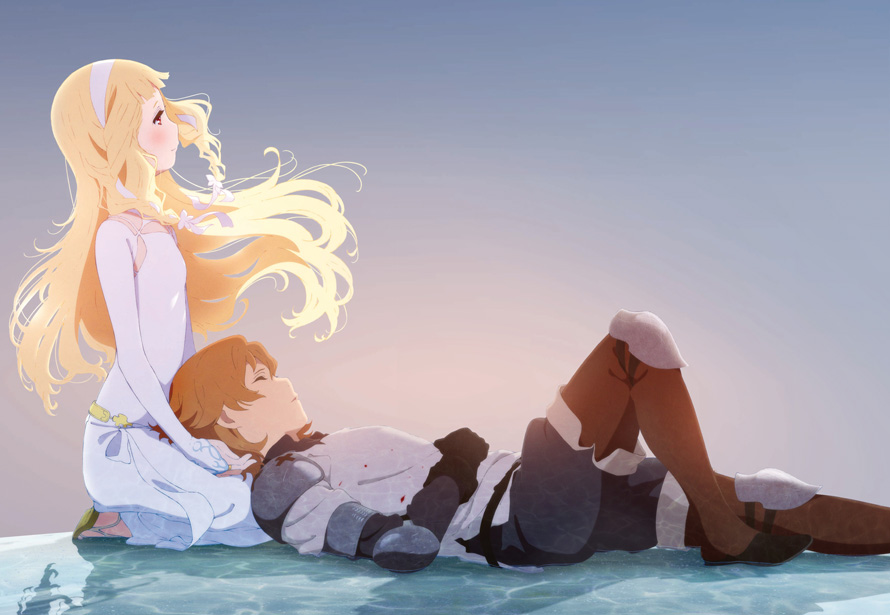 It’s long been my belief that stand-alone feature-length titles are the best way to introduce newcomers to Japanese animation. But with the advent of simulcasting, it seems that the established anime publishers in America have had difficulty with promoting such works, electing instead to focus on non-stand-alone theatrical films that are more of a “Mega-Hit TV Series: The Probably Out of Canon Movie” variety. As a result, there is now literally a decade’s worth of standalone theatrical anime films that simply never got licensed for release in America. This is only now starting to slowly change, as companies historically specializing in foreign film distribution have started to expand out to the anime realm as well. Eleven Arts is one such company, and it is through their efforts we get Maquia: When the Promised Flower Blooms.

Eleven years ago, when anime studio PA Works (that’s short for “Progressive Animation” and not “Pennsylvania”) first took a chance and set out to produce its own anime titles rather than merely assist other studios, it found success with several early titles such as True Tears, Canaan, Hanasaku Iroha, Tari Tari, and Nagi-Asu: A Lull in the Sea. There was a key common factor to these productions in that they all shared the same scriptwriter: the highly prolific Mari Okada, who thanks to these titles and more is now one of the few anime scriptwriters whose name is recognizable to a sizable portion of anime fans in the United States. 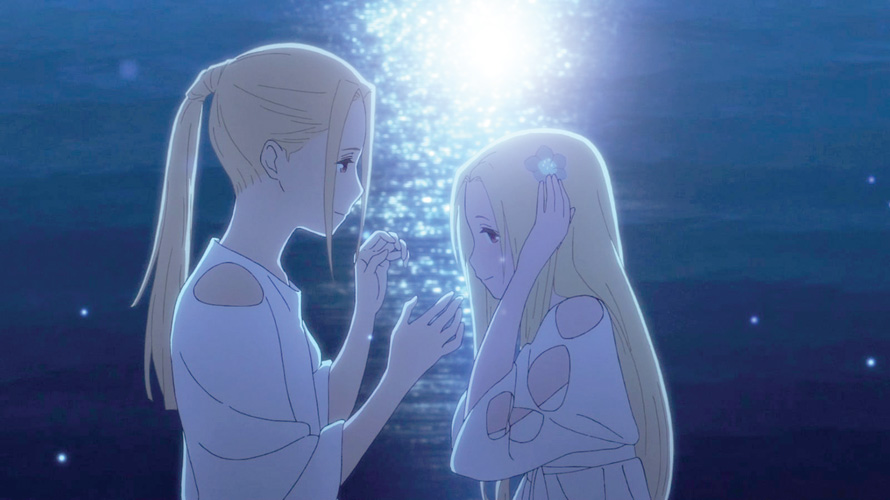 And so, when PA Works looked to take another chance and be the lead producer of its first stand-alone theatrical film, it was little surprise that they would work with Mari Okada once more. But what is surprising is that they also permitted her to direct the film. While directors becoming scriptwriters is fairly commonplace, the opposite is nearly unheard of. But when the result is something like Maquia: When the Promised Flower Blooms, perhaps it should become a trend moving for- ward because as far as first-time theatrical anime debuts go, this is the most impressive that I’ve seen since Jin-Roh: The Wolf Brigade 20 years ago.

The age of magic and mysticism is near its end. The Renato dragons are all but extinct, their last remaining now domesticated by mankind and dying from a disease of unknown origin. The blonde-haired, fairskinned Iorph whose life spans span centuries are similarly few in number as they live sequestered from mankind, weaving cloth whose patterns record their lives and history. As virtually immortal beings, the Iorph are taught to never form emotional attachments with non-Iorphs, as only sorrow can possibly result. Their reclusive yet peaceful existence is destroyed, however, when soldiers from the neighboring human kingdom pillage their home in an attempt to add the Iorph’s longevity to the royal bloodline. In the ensuing massacre, a young teenage Iorph, Maquia, manages to escape, stumbling upon a dead human woman clutching her still-alive infant child. With her entire world destroyed, having lost everything she once knew, Maquia takes the baby out of compassion. As a 15-year-old who’s never been to the outside world, Maquia knows nothing of how to care for a child, let alone herself, but who would leave a baby to die? She names the boy “Ariel,” and from there the tale begins. 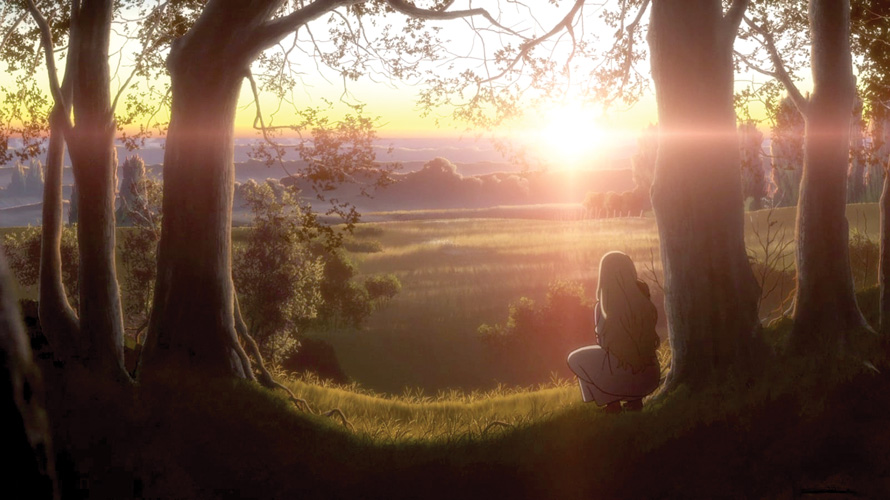 The fantasy elements primarily serve as a backdrop for showcasing the heightened emotions of the tale as young Maquia raises her adopted son Ariel from infancy through adulthood, along the way uniting with, departing from, and sometimes reuniting again with friendly and not so friendly faces. It’s an awful lot of ground to cover in about two hours, but we know from the beginning that this sort of story can only end one way. That becomes more apparent as time passes on; Ariel grows up, but Maquia with her nearly immortal life span remains virtually un-aging. Here I must confess that I am a gigantic sap for stories that use time dilation as a dramatic device for interper- sonal relationships, which makes Maquia: When the Promised Flower Blooms one of the greatest tearjerkers of the decade.

Given that it’s the result of relativity, I typically see time dilation used in science fiction works such as Aim for the Top! Gunbuster or Voices of a Distant Star (or the 2014 Christopher Nolan film Interstellar if you need a reference from this decade). But this fantasy world lends itself perfectly to the same concept, as time simply doesn’t register for Maquia the same way it does for nearly everyone she meets. To convey this to the audience, years or sometimes decades may pass instantly between scenes, with no caption or indication given to the viewer outside of contextually noticing the gradual advancements of technology and the aging of all those around Maquia herself. This is occasionally jarring, as a lot can happen to change a person’s personality greatly in the span of a few years and that isn’t just limited to seeing Ariel as a toddler compared to as a teenager. The few remaining Iorph survivors are themselves significantly affected, and their changes over time (or inability to do so) help demonstrate the value of Maquia’s time spent with her foster son as the impending war looms. 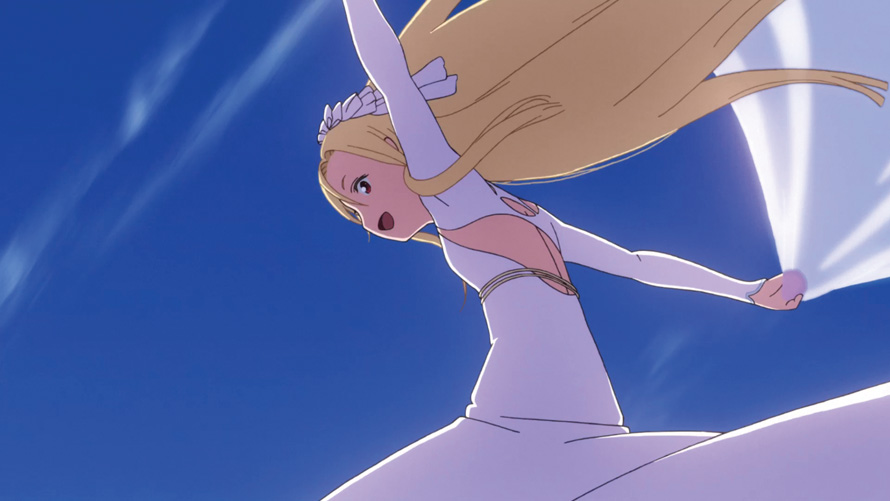 Available in both standard editions from Shout! Factory as well as a much pricier limited edition sold exclusively online from Nozomi Entertainment, the limited edition includes not only improved bitrate and the option for soft subtitles (an odd thing for the standard edition to omit in this day and age, I know), but also a second disc with the option to view the entire film side by side with the storyboards as well as a making-of featurette. Also included are two booklets: one an extensive series of interviews with the cast and crew, the other a series of “special stories” by Mari Okada: scenes presented in script form of side characters and moments that never made it into the film.

Maquia: When the Promised Flower Blooms is as beautiful a film as it is emotionally affecting, which means it is both INCREDIBLY SAD while also being joyful, as is Mari Okada’s forte. I look forward to seeing whether she directs another film, as this one is in part based on her own life experiences being raised by a young single mother and so the concept was one that she’d been developing for decades. In the meantime, she’s got multiple other projects for which her scriptwriting talents will be utilized.

Maquia: When the Promised Flower Blooms is available from Shout! Factory and Nozomi Entertainment.