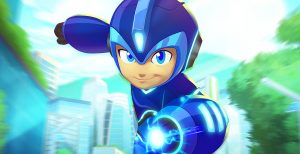 The new animated Mega Man series, Mega Man: Fully Charged, is getting ready to make its public debut. Those attending San Diego Comic-Con this month can look forward to the official premiere of some footage at a recently-announced panel, which will feature guests from Capcom, Man of Action, and DHX Studios.

Kazuhiro Tsuchiya (CAPCOM, video game producer, Mega Man, Asura’s Wrath), Man of Action (creators of Ben 10 and the team and characters of Big Hero 6), and Logan McPherson (DHX Studios, VP, creative and animated production, Slugterra, The Deep, Cloudy with a Chance of Meatballs (2D series)) give a behind-the-scenes peek into the production of this new animated show, aimed at kids 5 to 11. Celebrating the 30-year legacy of this iconic, game-based character, the panelists will discuss the background and creative evolution of the new series, followed by screening of never-before-seen footage from the show, coming soon to Cartoon Network.