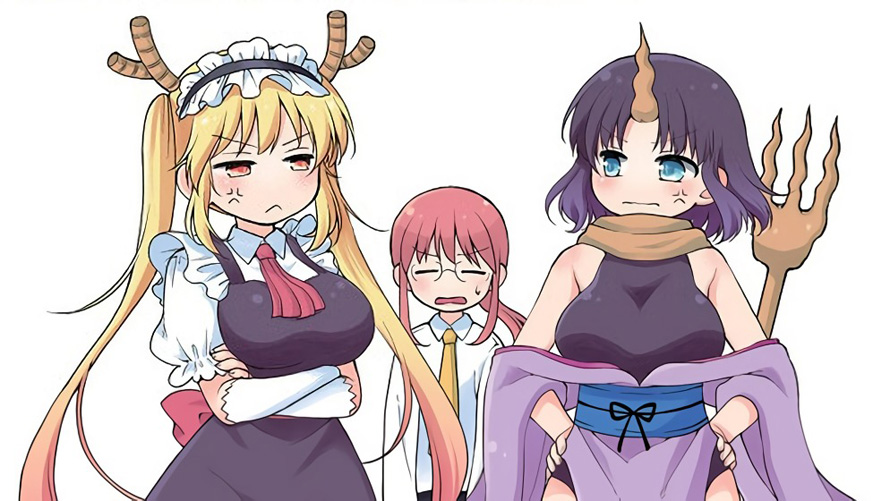 Elma’s Office Lady Diary, a spinoff of the popular Miss Kobayashi’s Dragon Maid series, delves into the everyday life of the corporate wage slave. Elma, a powerful dragon worshipped in her own world, poses as a human in contemporary Japanese society. She has one mission: to bring her dragon rival, Tohru, back to their original world. It sounds like a simple task, but Elma is unprepared for the culinary allures of the human world, and her inability to maintain a work-life balance means Tohru has very little to be worried about.

Although original creator coolkyousinnjya maintains top billing on the cover, the art comes from Ayami Kazama, a manga artist who was last seen published in English almost 10 years ago when her series The World I Create was picked up by DC’s short-lived manga imprint CMX. Compared to the art in the main Dragon Maid manga, Kazama’s art has a rounder, more wholesome feeling. The artist doesn’t shy away from the opportunity for a sexy joke, but the dial isn’t cranked up as high as “my dragon maid does the laundry with her saliva.”

Drawn as a four-panel comic, the art banks heavily on the cuteness of the characters. The majority of the punchlines come down to “Elma loves food.” The manga moves at a very relaxed pace; even when Elma and her co-workers are thrown into a “death march” to complete an urgent project under a tight deadline, Elma’s undeterred positivity drains any kind of stress from the situation. 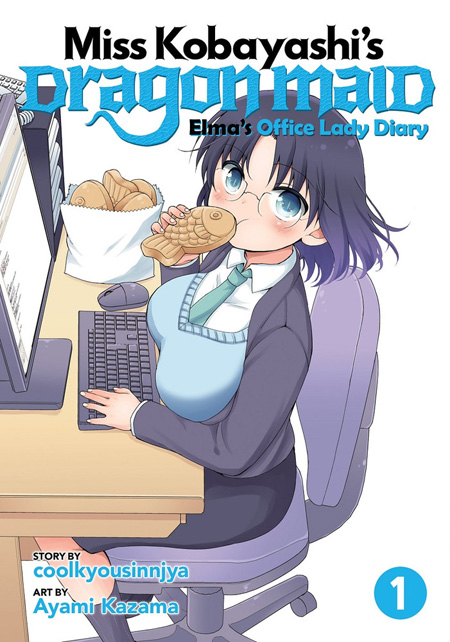 This is a very easygoing story devoid of any serious conflict. At its most substantial, Elma has less to say about the working life than it does about dating, living on a budget, and other social dilemmas faced by young adult women. Since Elma is a fantastic office lady who can do anything perfectly on the first try, the office functions mostly as a background setting so Elma can get into misadventures like attending a mixer in full dragon get-up or struggling to bake a pound cake. Although relegated to the supporting cast, the rest of the Dragon Maid characters make frequent appearances in the manga. Since Elma is such a flat character that readers can figure out her entire deal early in the manga, it helps that some additional characters are thrown in for variety. Elma is funny enough as a food-obsessed caricature of a working woman, but when eating is her only passion it comes off as a one-note gag.

It was impossible for anime fans to get away from the Dragon Maid anime during its run in 2017, and I was convinced to set aside my cynicism toward Kyoto Animation to watch a surprisingly inspired adaptation of a then little-known manga. Dragon Maid has since inspired multiple spinoff manga, including Elma, and has a second anime season on the way. While treading close to overexposure, Elma is an inoffensive companion piece, not hugely ambitious but perfectly competent for what it sets out to do. Elma gets the job done, but it won’t be winning any awards for outstanding performance.