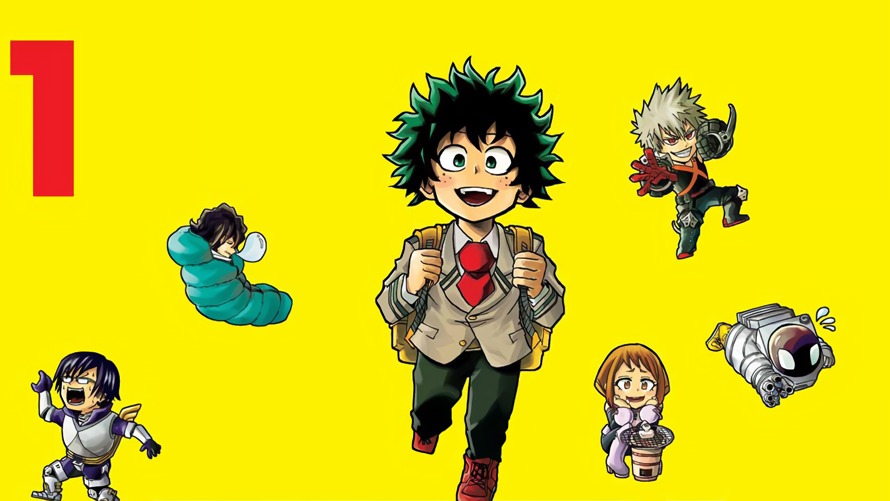 It would seem at first glance that My Hero Academia would be impossible to spoof. It is, after all, a manga that smashes (ha ha) all the tropes of shonen manga together with a Japanese take on American superheroes. It already is a spoof. Can you make fun of something that makes fun of itself? The gag strip My Hero Academia: Smash!! proves that, yes, you can if you find a new angle.

Smash!! pokes very gentle fun at the narrative of the main manga, retelling the story fairly straight and adding jokes about the crass commercialism surrounding it. My Hero Academia has reached a Simpsons or Wolverine level of success where even the creators are a bit embarrassed by how much money the property is making them … although never so embarrassed that they don’t want Smash!! to make them just a wee bit more. 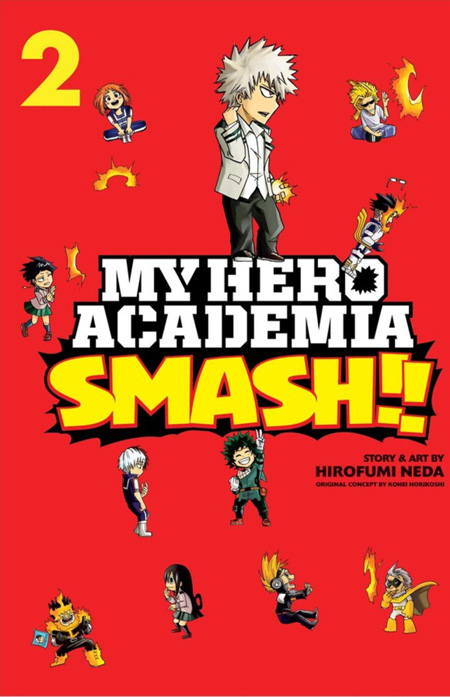 Writer/artist Hirofumi Neda knows the original manga inside and out and draws the characters in a more faithful, less chibi style than the reader might expect from a gag parody strip (for example, Viz’s own Detective Sasuke). Maybe that’s just the way Neda wants to draw the characters, or maybe the editors decided not to mock the goose that laid the golden egg too much. Readers who are really into yonkoma (that’s the Japanese word for gag strip, kids) will want to look at Smash!! to see the contrast. The art is chibi, just less so than most gag strips. Heck, in my eyes, it’s less chibi than manga like Is It Wrong To Try Pick Up Girls in a Dungeon? Viz clearly had a lot freedom with the English translation; in one panel the sound effect “thwhip” shows up, which is famously the sound that Spider-Man’s webshooters make.

So far, my criticism of Smash!! has been stylistic. Readers who just want to know, “Should I buy the damn thing?” may be frustrated. You might not have to love the original My Hero Academia to enjoy Smash!!, but it certainly helps, as the strips are packed with in jokes. Other gags will work for anyone who’s read a lot of shonen manga and is tired of endless stories of earnest boys training to be their best. My Hero Academia: Smash!! is mildly recommended for these readers and goes up a full letter grade for hardcore fans of the original series.

Spray on the Scents of Re:Zero with Branded Perfume Line
MEGALOBOX 2 Anime Officially in Production