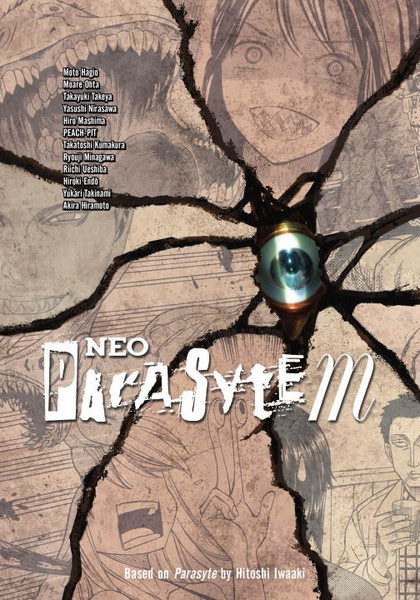 Last year, Kodansha published the English edition of Neo Parasyte F, a collection of manga tributes to the legendary horror manga Parasyte. All the contributors to Neo Parasyte F were shojo manga artists, and it was fun (not to mention bizarre) to see cute shojo versions of Hitoshi Iwaaki’s shapeshifting, body-snatching, people-chomping alien parasites. This second collection of Parasyte tributes draws from a wider pool of manga talent, producing a more varied selection of work and an impressive list of big names.

The biggest name of all belongs to Moto Hagio, a member of the famous “Year 24 Group” of shojo manga artists and one of the most renowned creators in manga history. Hagio turns in the longest story, a dense psychological thriller about Noh theater, a psychotic killer, and a girl troubled by a murderous voice in her head. Other stories feature the U.S. government recruiting Parasyte super-soldiers to fight in the Mideast; a Parasyte masquerading as a human and trying to live a normal married life (“It was the first time Yamawaki thought a human might kill him”); a beautifully trippy Parasyte dream sequence; and the inevitable slash fiction between the original manga’s teenage hero, Shinichi, and his parasitic hand Migi (“Humans do all sorts of things with their right hands!”). There’s even a photo-comic.

The contributors include Hiro Mashima (Fairy Tail), PEACH-PIT (Rozen Maiden), and Ryouji Minagawa (Spriggan). As in almost any anthology, the quality varies considerably from piece to piece, but the good stories are very good, and the bad ones are at least entertainingly weird. Also, and this cannot be stressed enough, friggin’ Moto Hagio did a Parasyte fancomic!