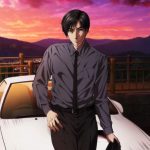 Parts 1 and 2, Legend 1: Awakening and Legend 2: Racer, will make their debut as a double feature on February 23. The final chapter, Legend 3: Dream, closes things out on March 9. You can check Azoland’s site for theater information and tickets.

The wheels are set in motion as Koichiro Iketani of the Akina Speedstars witnesses a mysterious driver outmaneuver and beat rival, Keisuke Takahashi of Akagi RedSuns. The impromptu race, he later discovers, was won by none other than his very own co-worker at the gas station, Takumi Fujiwara, the son of a legendary racer. In the high-paced world of street racing, Takumi shakes it up with an extraordinary racing style as the Akina Speedstars and the RedSuns go head to head on Mount Akina.

The leader of rival group Myogi NightKids, Takeshi Nakazato, wants to challenge the now infamous Takumi Fujiwara in a race down Mount Akina. As Takumi questions his identity as a racer, he finds that, there’s more to lose than just a simple race. When another member of the NightKids causes Takumi’s friend to crash his car, Takumi takes on the treacherous twists and turns down Mount Akina in his most challenging race yet.

Takumi Fujiwara has garnered the attention of the legendary street racer Ryosuke Takahashi, leader of the Akagi RedSuns. As he prepares for the biggest race of his life, Takumi finds himself trying to juggle his passion for racing with his personal life. With his girlfriend Natsuki wondering about their relationship, and his friends conflicting agendas, can Takumi find the answers behind the wheel?