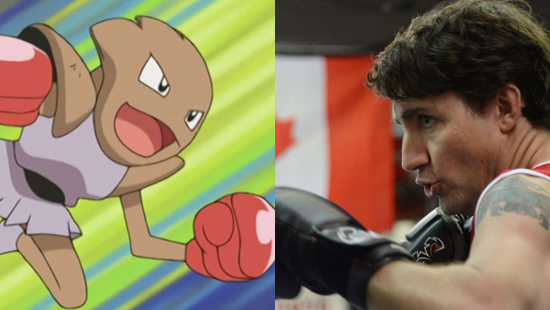 Who could have predicted in 1998 that there would be a social media service called Twitter, that the country of Canada would have an official account, and that 18 years since a little game called Pokemon was released there, that account would be asking, “which Pokemon do you think is the most Canadian?”

The future is now, and it is weird.

.@Pokemon has been around in Canada since 1998! Which Pokemon do you think is the most Canadian? #PokemonSunMoon pic.twitter.com/yfC0HHisF1

The tweet, which was prompted by the upcoming release of Pokemon Sun and Moon, garnered some pretty creative, funny and spot-on responses. Here’s a sampling:

Oh, @Canada. And the obvious answer is Bidoof @Pokemon pic.twitter.com/sGQuliHo7k

the debate is over; i will brook no dissent. @Canada @Pokemon pic.twitter.com/tWimuL3YVI

Prime Minister Justin Trudeau as Jigglypuff: adorbs, but since Trudeau once boxed a guy for charity (and won), may I suggest Hitmonchan?