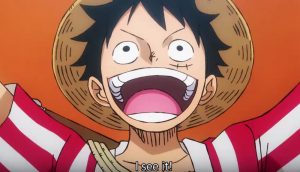 Funimation has North American screenings lined up for the One Piece: Stampede anime film starting on October 24, with ticket sales set to go live on September 27. Ahead of that, the feature’s English dub cast has been revealed, so see who’s playing who below.

One Piece: Stampede will screen both dubbed and in Japanese with English subtitles. Here’s the subbed trailer:

Monkey D. Luffy and his Straw Hat pirate crew are invited to a massive Pirate Festival that brings many of the most iconic characters from throughout the franchise to participate in competition with the Straw Hats to find Roger’s treasure. It also pits the Straw Hats against a new enemy named Bullet, a former member of Roger’s crew.

Learn more about the movie and grab tickets starting tomorrow via the official website.