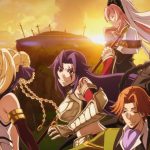 The spirit of Lodoss War lives on in author Ryo Mizuno and illustrator Miyuu’s Record of Grancrest War light novels, and the anime adaptation officially has a premiere date. According to an update on the official website, the series premieres January 5 on Tokyo MX, Tochigi TV, Gunma TV, and BS11, with TV Aichi and ABC to follow on January 9 and 10, respectively.

Sankarea‘s Mamoru Hatakeyama directs the adaptation, with Ryo Mizuno and Shunsaku Yano on series composition for the A-1 Pictures production. Aniplex of America has plans to distribute the series in the west, but we’ll have to wait for more information.