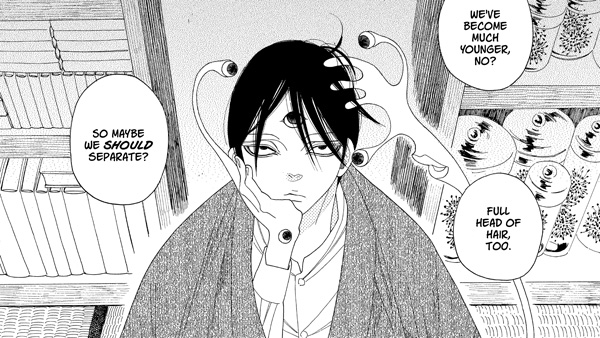 Hitoshi Iwaaki’s manga Parasyte, about an invasion of body-snatching, man-eating intelligent parasites, is one of the classics of science-fiction horror. Since its run in the 1980s and 1990s, its combination of gruesome violence, body horror, and psychological exploration have influenced countless manga artists. In Neo Parasyte F, 15 of those artists join forces for an anthology of tribute stories. Oh, and they’re all shojo artists. That’s right: it’s a collection of Parasyte shojo manga.

Unsurprisingly, most of the artists draw in a prettier style than Iwaaki, whose art in the original Parasyte is charmingly awkward when he has to draw anything other than people morphing into grotesque shapes and chomping on other people. But beyond that, the stories are all over the map. Some artists contribute straight-up horror; others serve up twisted romances, introspective dramas, or gory parodies of shojo manga tropes. There’s a Parasyte cooking show and a Parasyte dating sim game. 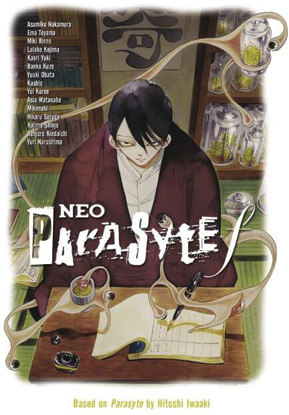 (“His extendable tentacle can reach up to ten meters.” “That makes him popular?!”)

Many of the artists mention their fondness for the original manga’s central relationship between surly teenager Shinichi and his snarky Parasyte hand, Migi, so it’s no surprise to find stories with a touch of shonen ai tease. The talent roster is a mix of big names like Kaori Yuki (The Cain Saga, Angel Sanctuary) and up-and-comers.

Like most anthologies, Neo Parasyte F has hits and misses. All the stories are steeped in the Parasyte backstory and characters, so it’s unlikely to do much for those who haven’t read the original manga. But most of the entries are strong, and old-school Parasyte fans should get a kick out of the chance to revisit Iwaaki’s weird, violent, strangely affecting universe. Recommended.